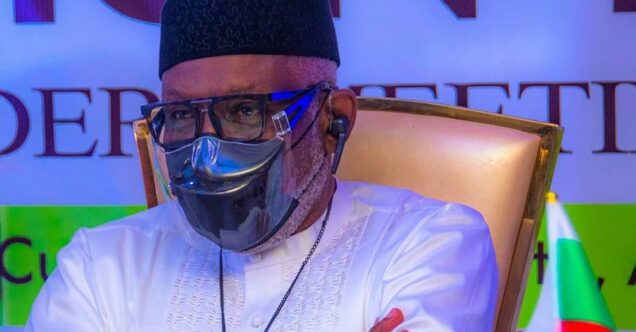 Gov. Oluwarotimi Akeredolu of Ondo State has said he is committed to restoring electricity to the Southern Senatorial Zone, after 14 years of total blackout.

The Commissioner of Energy, Mines and Mineral Resources, Mr Razaq Obe, made this known after a meeting with the Ondo South Power Committee in Akure.

The committee was led by Oba Festus Olumoyegun, Oniju of Iju-Odo in Okitipupa Local Government Area.

Obe, who underscored the importance of power to human existence in modern society, said it was very pathetic, absurd and unprogressive for a strategic part of the state to be without electricity for nearly 14 years.

“We are going to invite all stakeholders in the power sector, which will include the Benin Electricity Distribution Company(BEDC), Niger Delta Holding Power Company(NDHDC), Transmission Company of Nigerian(TCN), Nigerian Electricity Regulatory Commission (NERC).

”We will try to urgently solve this perennial power problem in communities in the southern part once and for all.

”Gov. Akeredolu created the Ministry of Energy Mines and Mineral Resources, to speed up the reconnection of the zone to the national grid in record time.

”The governor is tired of the usual excuses. He is prepared to step on toes to achieve the desired results in record time,” he said.

Obe commended the committee, which is made up of eminent traditional rulers and other personalities, for their untiring efforts towards restoration of electricity to their areas.

Earlier, the Chairman of the Ondo South Power Restoration Committee, Oba Olumoyegun, highlighted the role played by the former governor of the state, Dr Olusegun Agagu and commended him for citing the mega power plant in Omotoso in Okitipupa Local Government Area.

”We have resolved to explore alternative means by partnering with the consultant to provide sustainable electricity for the people,” he said.

Also speaking on the development, the consultant, Mr Idowu Desmennu assured the people of the area that electricity would be restored on or before the first or second quarters of 2022.

“The NERC is working on a lot of things in areas we don’t have access to. These include six feeders, running through six local government ares in the southern part of the state,” he said.