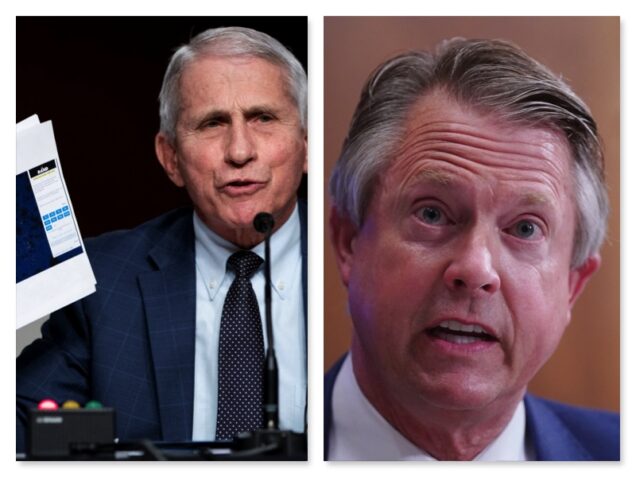 The spat was a sign of the increasing hostility between conservatives and one of the nation’s top COVID-19 experts.

Toward the end of a more-than-three-hour Senate Health Committee meeting, Marshall pointed to Fauci’s government salary of more than 400,000 dollars and asked whether he would make his financial disclosure available to the public.

Fauci is a government employee and his financial disclosure forms are available to the public and can be accessed through a Freedom of Information Act request.

“Wouldn’t you agree with me that you see things before members of Congress would see them, so that there’s an air of appearance that maybe some shenanigans are going on.

“I assume that’s not the case,” Marshall said.

When Fauci called Marshall “misinformed” and said his financial disclosure was public information and available upon request, Marshall said his office had been unable to find the information.

As Kansas Senator Jerry Moran prepared to ask a question, Fauci was caught on the microphone saying “what a moron” and “Jesus Christ.”

In a press release after the hearing, Marshall doubled down and said Fauci was “clearly distraught by the line of questioning.”

“Calling me a moron during a Senate hearing may have alleviated the stress of the least trusted bureaucrat in America, but it didn’t take away from the facts,” Marshall said.

The National Institute of Allergy and Infectious Diseases, which was headed by Fauci, did not immediately respond to a request for comment.

Fauci was testifying with Rochelle Walensky, director of the Centres for Disease Control, and Janet Woodcock, acting commissioner of the U.S. Food and Drug Administration.

He said about the current surge of COVID-19 cases spreading through the country as a result of the omicron variant.

Throughout the pandemic, Fauci has been a target of conservatives who have chafed at the way the government has handled health restrictions.

But nearly two years into the pandemic, tension has ratcheted up between Fauci and conservatives in Congress, where there was a partisan divide over who wore masks in the hallways and in the chamber.

Senator Rand Paul, who has been a frequent critic, has called Fauci “a lead architect” of the government’s response to the virus, from shutting down businesses at the beginning of the pandemic to urging people to wear a mask and get vaccinated.

Earlier in the committee hearing, Marshall, an obstetrician and gynaecologist, questioned Fauci about his role in authorising “gain of function” research, a type of experiment where scientists change a virus to make it more potent as a way to study its effects.

Marshall has said he would like a ban on a gain of function research and has made investigating the origins of COVID-19 a core platform for his first year in office.

Fauci also clashed with Paul over an email exchange between him and former director of the National Institutes of Health Francis Collins.

In the exchange, Collins and Fauci discussed how to combat what they called a “fringe” narrative about the pandemic raised by epidemiologists at prestigious universities.

In response, Fauci held up a print-out of Paul’s Senate campaign website, where there was a picture of Fauci next to the text “Fire Dr Fauci” and several buttons where people can make donations to the campaign.

Fauci talked about how he has gotten death threats after similar exchanges with Paul and said a man who was arrested driving from Sacramento to Washington, D.C. with an AR-15 and ammunition said he was going there to kill Fauci.

Fauci has often drawn the ire of activists.

In the 1980s, he was among those criticised for the government’s slow response to the AIDS epidemic.

Members of ACT UP burned him in effigy outside of the NIH building during one protest.

But Fauci, who later became friends with some ACT UP leaders, has drawn a distinction between activists fighting for more resources for people with the disease.

But also those who have criticised him for public health measures intended to decrease the spread of the virus. (dpa/NAN)