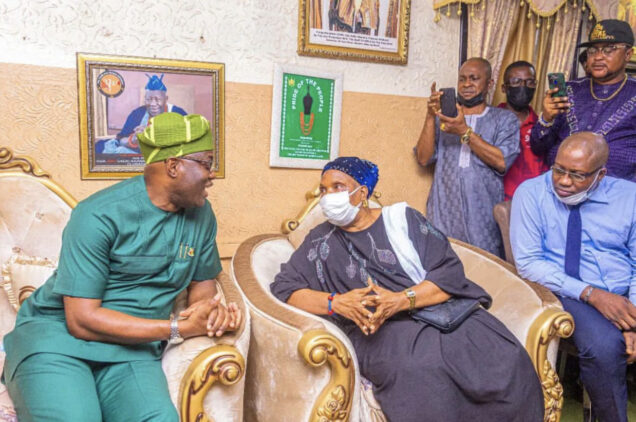 Oyo governor, Seyi Makinde on Tuesday reacted to raging controversies over the successor of late Oba Saliu Adetunji the Olubadan of Ibadan.

The hierarchical chieftaincy system of Ibadan has a clear path of succession with the chief at the top of the hierarchy in line to take over the throne after the passage of Olubadan.

But the elevation of chiefs on the hierarchy to the status of junior kings in an adjustment to the chieftaincy system by former Governor Abiola Ajimobi has resulted into controversies over the succession system after the death of Oba Adetunji.

Lekan Balogun, the chief at the top of the hierarchy was one of those crowned junior king by Ajimobi and some analysts had insisted that he cannot be crowned a second time as the Olubadan.

However, others have argued that the adjustment in the chieftaincy law done by Ajimobi did not disrupt the chieftaincy system of Ibadan and path of succession to the Olubadan throne.

But reacting to the controversies during his condolence visit to the Popo-Yemoja, Ibadan residence of late Oba Adetunji on Tuesday, Makinde said the Ibadan traditional institution must be reverted to its original concept as a way out of the controversies.

The Governor said he had heard enough on the controversy surrounding who or who was not to be installed as the next Olubadan of Ibadanland, including other narratives around the matter.

“This will be the last time there will be controversy on the next person to ascend to the throne of Olubadan of Ibadanland,” he said.

He assured sons and daughters of Ibadanland that his administration would do what was right to preserve the integrity and sanctity of the traditional institution of Ibadanland.

“Today, Baba (Oba Adetunji) is not with us, but what he stood for is with us.

“The history of Ibadan traditional institution cannot be completely narrated without acknowledging what baba stood and fought for.

“I want to assure you that there is nothing baba has left that will be abandoned,” he said.

Makinde further announced that the departed Olubadan would get a royal and befitting burial.

“We have come here today to say that we are with you. What we can do as children is to give baba a royal and befitting burial, and as a government, we will do just that,” he said.

Speaking on behalf of the family, Dr Abdul Raheem Adetunji, appreciated the governor and his entourage for the condolence visit.

Adetunji prayed for more wisdom for the governor to succeed in piloting the affairs of the state.