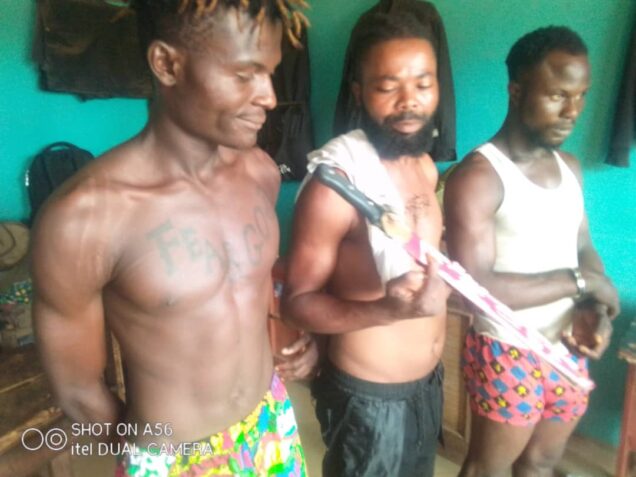 Three of the armed robbers arrested by the police in Edo

Two of the suspects, Bishop Christopher (22) and John Abuda (24), were arrested on Monday, 10 January, 2022, at Campus II South Ibie, a student community located opposite the main campus of Auchi Polytechnic, in Etsako West Local Government Area of the State.

It was gathered that the suspects were picked up by a team of operatives led by the DPO of South Ibie, CSP Emmanuel Agbo, who recovered one English pistol, two live ammunition and a battle axe from the suspects.

It was gathered that the suspect and three others now at large, beat the tricycle rider and robbed him of his hard earned money and mobile phone.

On receipt of the information, police operatives in collaboration with local vigilante, led by DPO of Textile Mill Road division, SP Olayinka Adeleye, immediately swung into action and arrested God’s time. The victim’s phone was recovered from him.

The other three suspects who are members of a five-man gangsters who disguised as vigilante members working under a vigilante commander nicknamed Dada, to rob unsuspected member of the public, were arrested on 11 January, 2022, at about 11 pm.

“The suspect have confessed to the crime. Intensive effort is on with the view to arrest other fleeing gang members. Suspect will soon be charged to court at the end of the investigation,” the Command’s spokesman, SP Kontongs Bello, said in a statement.

Meanwhile, the State Commissioner of Police, CP Philip Aliyu Ogbadu, has commended the effort of the Command’s operatives and vigilante members who swung into action and arrested these suspects.

Ogbadu while assuring the residents of the State that the Command has put in some measures on ground to ensure the safety of lives and properties, further called on law abiding citizens to continue to support and cooperate with the Police towards ensuring a more secured Edo State where economic activities will flourish and prosper.