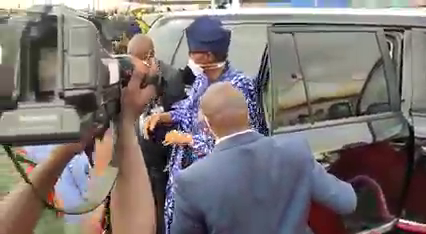 President Muhammadu Buhari has arrived in Ogun for the inauguration of some projects executed by the State Governor, Prince Dapo Abiodun.

He was received by Abiodun and other top state government officials at 10.40 a.m in the Mojoda area in Ijebu-Ode, where he cut the tape for the inauguration of the 14 kilometres Ijebu-Ode-Mojoda-Epe Expressway.

Other projects are two housing estates- 527-Unit Low and Medium Housing Scheme at Kobape in Obafemi-Owode Local Government area and the 83-Unit Duplexes at Kings Court Estate, Oke-Mosan in Abeokuta.

Buhari is also scheduled to hold a stakeholders’ meeting at the Presidential Lodge in Abeokuta to end the visit.

Meanwhile, the ancient city of Abeokuta is wearing a new look as major highways, bridges and other major public institutions and places were beautifully decorated as part of an arrangement to add colour to the programme.

The Federal Road Safety Corps (FRSC) and the state traffic monitoring and control agency had closed some major roads to traffic.

Alternative routes were, however, created and opened for motorists in the state.