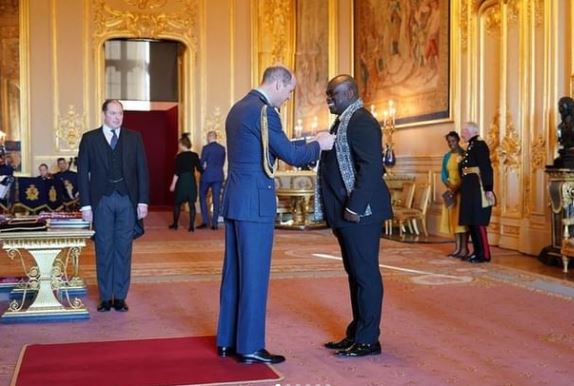 Duke of Cambridge, Prince William, presenting the medal of Order of the British Empire (OBE) to Gospel act, Micheal Olarewaju at Windsor Castle.

Multi-talented Nigerian-British gospel singer-songwriter and broadcaster, Muyiwa Olarewaju, has been awarded the prestigious Order of the British Empire (OBE) in the Queen’s birthday honours list.

The Duke of Cambridge, Prince William, presented the medal to Olarewaju for his outstanding achievement and service to his community.

The accomplished gospel singer on Friday took to social media to announce this new feat and share photos from the event with his fans and followers.

An excited Olarewaju wrote: “For Services To Music

Thank you to everyone that has relentlessly invested in this “young man”, you made it possible….

A lecturer of mine told me no one is paying attention to you doing gospel music…..years later, here we are…. #grateful”

Queen Elizabeth bestows OBE honours to British citizens involved in business, charity, culture and entertainment, along with science and sport twice a year.

Olarewaju was awarded an OBE when he appeared on Queen Elizabeth’s 2020 birthday honours list but received the medal during an investiture ceremony on Wednesday, January 12, 2022.

The Gospel singer and composer has over the years worked as a performer, broadcaster, and presenter.

He was the first international act to perform on America’s popular entertainment channel, BET, for the prestigious annual Celebration of Gospel show in 2009.