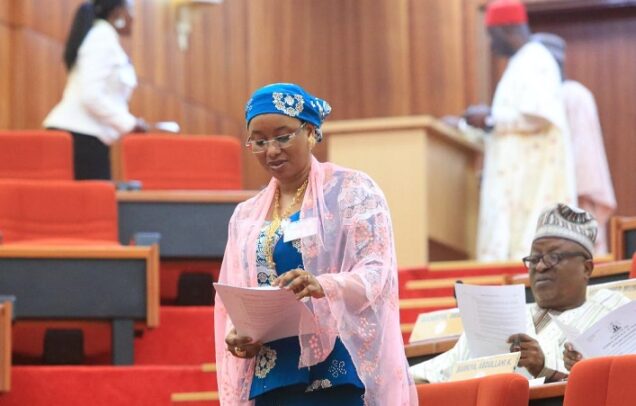 Binani was reacting to the allegation that the Office of the Senior Special Assistant to the President on Sustainable Development Goals, OSSAP-SDGs, used imaginary solar streetlights projects in her senatorial district to steal funds.

The Senator, who is also the Chairman of the Senate Committee on SDGs, spoke through her media aide Adamu Ibrahim, in a statement issued on Friday in Yola.

She said that the project was fully executed and that the purported report was fake news.

According to the Senator, All in One solar street lights were installed in five out of the seven Local Governments Areas (LGAs), of her senatorial district by OSSAP-SDGs, as stated in the terms of the contract.

“The five LGAs are: Fufore, Yola North, Yola South, Song and Hong, with each having 320 numbers of All in One solar street lights to the credit of the Senior Special Assistant to Mr. President on SDGs and her officials.

“The Installation of these lights was perfectly executed and distributed across the wards, districts, and special areas of need, in consultation with stakeholders and traditional rulers from the various local governments areas,’’ Binani said.

She further explained that a symbolic inauguration of the streetlights projects was held at Limawa Ward, Yola North, on Aug. 6, 2020, and was witnessed by some top party officials and traditional title holders.

Binani said the project was executed according to the people’s needs and demands across the 76 wards in her constituency.

She said some of the demands included lightening up their environment to help curb rising incidents of robbery, rape and other atrocities being perpetrated using the cover of darkness.

The senator said the report was an attempt to impugn the integrity of OSSAP-SDGs, and the Senior Special Assistant to the President on SDGs, Mrs Adejoke Adefulire.

“The fake report is also an attempt to disrupt the work of the SDGs Office,’’ she stated.

According to her, Adefulire has been in one state or the other in recent months commissioning projects that will benefit the common man in Nigerian, in tune with the determination of President Muhammadu Buhari’s administration to achieve the 2030 Agenda.

She noted that the projects were in tune with Sustainable Development Goals 7 and 11.

The Senator therefore, challenged anyone in doubt to visit the 56 wards across the five LGAs areas mentioned for confirmation.