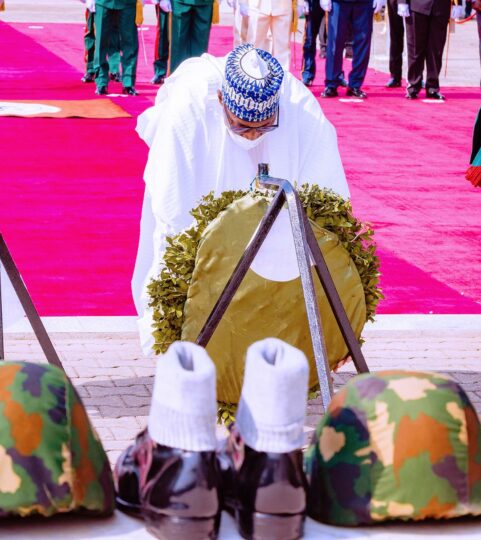 Members of the Nigerian Legion and Military Widows Association have commended President Muhammadu Buhari for his commitment to the welfare and wellbeing of the military veterans and families of the nation’s fallen heroes.

Jibrin said that President Buhari had continued to show a strong commitment to their welfare and that of the families of their colleagues who paid the supreme price while serving their fatherland.

He said that the government had ensured that their monthly pensions were paid promptly, adding that retirees now received their pay on the 28th of every month.

The chairman explained that the recent protest by the pensioners was in connection with minimum wage arrears and not regular monthly pension and other entitlements.

He disclosed that the day afforded them the opportunity to sensitise the public and seek for donations to support the families of the fallen heroes.

According to him, whatever they were able to gather is going to be ploughed into programmes that affect the lives of the widows and their children and other dependents of the families of the fallen heroes.

“The government is doing very well because pensions of legionnaires and retirees are paid on time because every 28 of every month we receive alert.

“You can see that as far as entitlement and pension of any legionnaire is concerned, it is being taken care of very well.

“The recent protest by some of our members was in respect of the arrears of the adjustment made on the minimum wage.

“As it affects the military, it is a different model. At the time the adjustment was made, the military was left but we have to wait for the Salaries and Wages Commission to give the pension board the chart with which to calculate.

“As at the time it happened in May last year, the budget had already been passed and so we were informed that it would be captured in 2022 budget and indeed it was captured,’’ he said.

The President, Military Widows Association, Mrs Veronica Aluko, said the celebration was a reassurance that the sacrifices of their husbands, who laid down their lives for the nation, were not in vain.

According to her, in terms of welfare, our husbands are gone, there is no pension and we have to fend for our children.

“I think sometimes last year, there was an outcry by the widows that we need something to generate revenue for the orphans and the widows which Mr president approved through the Nigerian Legion for us to sell stickers and daily tickets to raise revenue.

“I believe with that it is a beam of light for us to smile. Maybe by next year, we will smile better.

“We just started this January and I am pleading with state governors to open their doors to us when we come to them.

“We need your support because our husbands laid their lives for all,’’ she said.

A member of the legion, Lt. Hassan Daja, said the armed forces day celebration was a reminder to them that were still alive to keep thanking God and pray for their departed colleagues.

Daja said he had participated in several peacekeeping missions across the globe, adding that retiring alive was a great act of God.

He also commended President Buhari for his commitment to their welfare and prompt payment of their pensions.

AFRDC is celebrated globally to recognise and appreciate the sacrifices made by their citizens for the cause of peace.

In Nigeria, Jan. 15, is set aside annually to honour fallen heroes who laid down their lives in service to humanity during the first and second world wars, Nigerian civil war, peace support and various internal security operations.

The event is also used to honour veterans still alive and as a medium for soliciting financial, moral and material support for the families of the fallen heroes.