We are committed to promoting industrial harmony - LASG 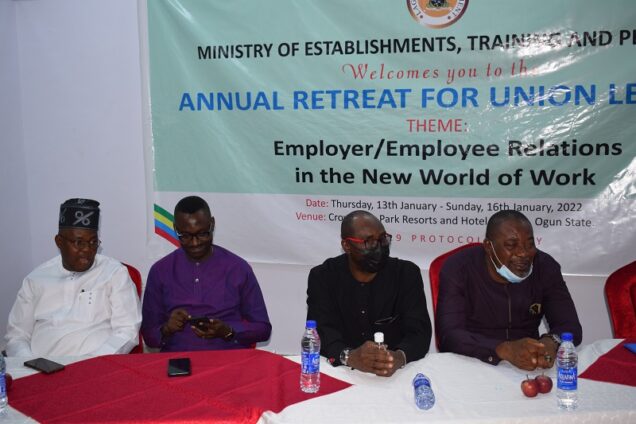 The Lagos State Government through the Ministry of Establishments, Training and Pensions has organized a retreat for union leaders in Lagos State to promote industrial harmony.

The event which commenced on Thursday took place at the Crown City Park Resort and Hotel, Agbara, Ogun State and had as its theme: “Employer/Employee Relations in the New World of Work.”

At the opening ceremony which took place on Friday, the Special Adviser to the Governor on Labour and Industrial Relations, Babatunde Oladeinde Williams, said it was an annual event which is organised for Union Leaders.

Williams said the event would enable union leaders to network, socialize and engage in productive interaction with government officials.

He said the retreat was organised with the objective of creating a symbiotic bond and promoting industrial harmony in the State.

He reminded them that the Administration of Babajide Sanwo-Olu is labour-friendly which is committed to ensuring excellent service delivery to the good people of Lagos State through a well-motivated and competent workforce.

Williams added that the retreat would avail labour leaders the opportunity to refresh and upgrade their knowledge on current trends in labour and Industrial Relations practices with particular reference to the management of Employer/Employee relations in the dynamic and ever-changing world of work.

The Head of Service, Mr Hakeem Muri-Okunola, who was represented by Permanent Secretary, Public Service Office, Mr Samson Ajibade, congratulated the Ministry of Establishments, Training and Pensions as well as the Labour Unions for creating room for interaction.

Ajibade advised union leaders not to fight for their members alone but to also advise the government on key areas for development.

According to him, the union leaders must be able to make sacrifices in some areas stating that government and unions leaders should be partners in progress.

While declaring the retreat open, Ajibade said the retreat provided an opportunity for union leaders to unwind and relax and encouraged them to do so while observing COVID-19 protocols.

He revealed that Lagos State was the only State that organizes this kind of event in the whole of the federation.

He said the resolve of the state government to train and re-train union leaders as a way of building lasting peace and harmonious working relationship, was a commendable development.

As part of the programme, lectures on leadership, emotional intelligence and industrial harmony and sustainable productivity were delivered whilst guided tours/excursions and gala night were held to round off the retreat.