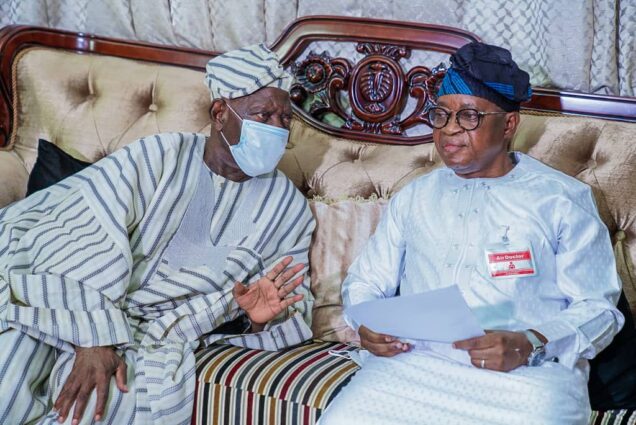 Oyetola stated this on Sunday while congratulating the former governor of the State on the occasion of his 83rd birthday.

Oyetola in a statement by his Chief Press Secretary, Ismail Omipidan, described Baba Akande as a compendium of wisdom, father, and an exemplary elder statesman.

He commended the octogenarian for his service to the State while also hailing his contributions to the growth and success of the ruling All Progressives Congress, APC, a party he served as its first interim National Chairman.

The Governor said, “Baba Awon Omo Ke kee ke (father of small children), as we fondly call him is no doubt a peacemaker, whose love for a united Nigeria in unquantifiable.

“He is also a relentless elder statesman who is still active and working for a prosperous and democratic country. He is indeed a true progressive.

“As a quintessential administrator and a fine grassroots politician, Baba’s immense contributions to nation-building and national integration is written in the sands of time.

“Again, his legacy in the political space of Osun is unmatchable. History will not forget that it was Baba Akande who birthed the legacy of prudent and transparent management of men and resources in the State. He is a compendium of wisdom.

“On behalf of my family, government and good people of our darling State, I say thank you Baba for all you stand for and do. I wish you prosperous years ahead in good health and more wisdom in service to God and humanity, as you continue to contribute to the growth of our party, the APC, Osun and Nigeria at large”, Oyetola said.