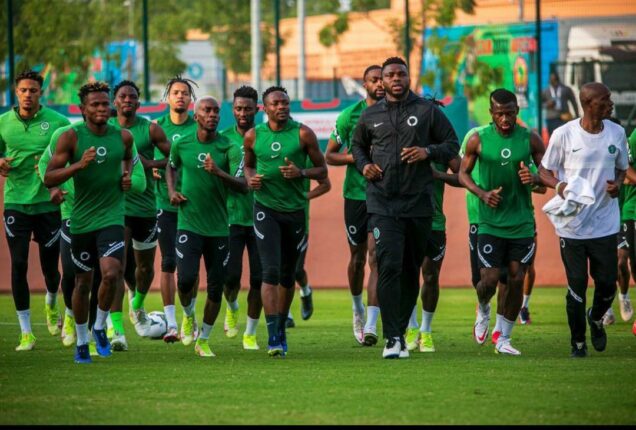 Super Eagles coach Augustine Eguavoen has warned his players against complacency and taking their chances in front of goal in subsequent matches of the 2021 AFCON in Cameroon.

The coach said this at a press conference after Nigeria booked a spot in the second round with a comfortable 3-1 win over their hapless Sudanese counterpart.

Eguavoen however said the team did not play at the same high tempo, especially in the second half and that gave the Sudanese the comeback for the consolatory goal.

“No game comes easy, We knew it was going to be tough and tried as much as possible to be ready for any opponent that comes our way.

“So it’s a little bit difficult to say whether we were complacent in the Sudan game or not but we will discuss this with the boys going forward,” he said.

The coach also stressed the need for the team to always take their chances in front of goal and defend as a unit to avoid unnecessary pressure and conceding cheap goals.

“I think we are strong enough with our bench but sometimes scoring goals is a bit of a problem, we waste chances in front of goal.

”Against Egypt, we missed a couple of seaters, against Sudan also, so that was what gave the Sudanese hope that they can survive, it’s a threat, so we need to work on this,” he said.

The coach however assured of making some changes in the final group match against Guinea-Bissau on Wednesday, so as to give players who have not tested action some game time.

“Obviously, we will make changes for the last group game against Guinea-Bissau.

“We have depth in the team and it’s a good opportunity for the other players to play, we will play to win the game and I trust the players to do a great job,” he added.

Egypt are second with three points, while Sudan and Guinea-Bissau have one point each.

The Super Eagles will take on Guinea-Bissau on Wednesday in their last group match.