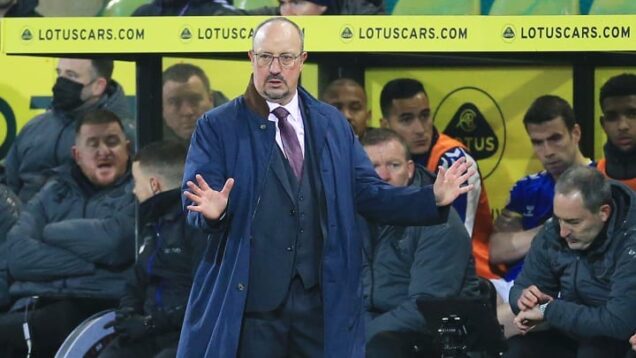 Everton manager, Rafa Benitez is on the verge of being sacked after his side lost 2-1 to relegation threatened Norwich on Saturday.

His side has only won one game in the league since September.

They now sit 15th on the table with only six points above relegation.

Everton’s last league win was against Norwich who defeated them on Saturday.

The Athletic reported that Benitez’s time may be up and that he could be sacked before their game next week against Aston Villa.

Benitez was appointed coach during the summer after the exit of Carlo Ancelotti who joined Real Madrid.

The Spaniard since his appointment has failed to win over the fans or get the team to perform better.

During their Saturday game, fans displayed banners calling for his sack.

The banners were also displayed after they defeated Hull City 3-2 in the recent FA Cup round.

When asked if he believes he would get more time from his employers, Benitez said: “ I am a professional and I have enough experience.

“I came here to fix problems that is not just the last five months. Maybe we are talking about years.

“You try to fix these problems but you need time. The top scorer from last season is not playing half of the season so it is more difficult.

“Now they are coming back, hopefully we will be stronger’.