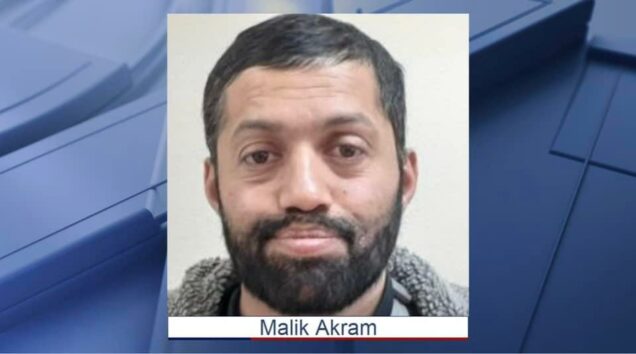 The face of Malik Faisal Akram, the British hostage taker in Colleyville synagogue in Texas has now been revealed as the FBI takes his investigation to the UK.

Earlier the FBI identified the 44-year-old British national as the man who took four people hostage at Congregation Beth Israel synagogue for 10 hours before an FBI SWAT team stormed the building.

Akram was shot dead after the last of the hostages got out and an FBI SWAT team stormed the building.

The FBI said there was no indication that anyone else was involved, and the motive is still being investigated, said Special Agent in Charge Matthew DeSarno of the FBI Dallas Field Office.

According to Faisal’s brother, Gulbar, the FBI will be coming to the UK on further investigation about the hostage taker.

Gulbar issued a statement on the Facebook platform of Blackburn Muslim Community on Sunday, detailing his involvement in the negotiation that led to the release of the four stages.

He said the hostages were not rescued as the FBI claimed, but were voluntarily released by Faisal.

Salaam Family & Friends, It is with great great sadness I will confirm my brother Faisal passed away in Texas, USA this morning.

We are absolutely devastated as a family.

We can’t say much now as their is an ongoing FBI investigation.

We would like to say that we as a family do not condone any of his actions and would like to sincerely apologize wholeheartedly to all the victims involved in the unfortunate incident.

Sitting in the incident room all last night at Greenbank until the early hours liaising with Faisal , the negotiators, FBI etc And although my brother was suffering from mental health issues we were confident that he would not harm the hostages.

At around 3am the first person was released then an hour later he released the other 3 people through the fire door unharmed.

Don’t believe the bull#### in the media. They were released from the fire exit and Not rescued.

At around 3am the first person was released then an hour later he released the other 3 people through the fire door unharmed. Don’t believe the bull#### in the media. They were released from the fire exit and Not rescued.

A few minutes later a firefight has taken place and he was shot and killed. ILWIAR. There was nothing we could have said to him or done that would have convinced him to surrender.

The FBI are due to fly into the UK later today so we don’t have much else to share at the moment. Obviously our priority will be to get him back to the UK for his Funeral prayers although we have been warned it could take weeks.

We would also like to add that any attack on any human being be it a Jew, Christian or Muslim etc is wrong and should always be condemned.

It is absolutely inexcusable for a Muslim to attack a Jew or for any Jew to attack a Muslim, Christian, Hindu vice versa etc etc

Finally to all the people that have been bombarding us with non stop calls and texts please for the love of Allah STOP please STOP show some restraint and respect at such a difficult time for our family especially after losing our younger sibling barely 3 months ago.

Please if you can grant us some privacy as we are grieving privately in our homes.

Please keep our family present and deceased in your prayers.

I will of course update you very soon.

The Blackburn Muslim Community issued a different statement that further defined Faisal and wished him “highest ranks of Paradise”.

Faisal Akram has sadly departed from this temporary world and returned to his Creator.

He was the son of Mohammed Malik Akram and the brother of Gulbar, Malik, Nasar, Yassar and Late Gulzameer Akram.

May the Almighty forgive all his sins and bless him with the highest ranks of Paradise.

May Allah give strength and patience to his loved ones in dealing with their loss.

There are many stories circulating in the local community so please avoid taking part in the sin of backbiting.

Let the authorities complete their investigations, have respect for the family and allow them to mourn peacefully