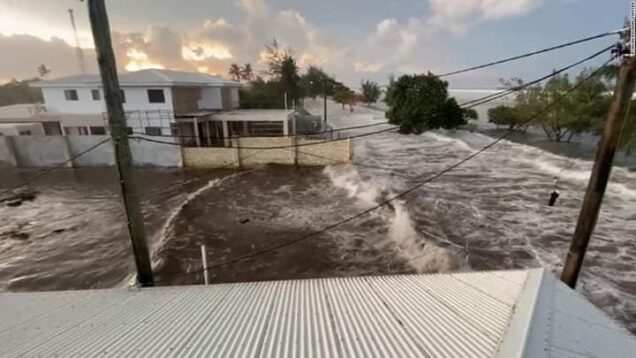 Early photos of the Tsunami in Tonga

The massive eruption of the Hunga Tonga-Hunga Ha’apai volcano in Tonga has lately sent tsunami sweeping across the shore of the South Pacific island country, and multiple countries nearby have reported rising water levels or issued tsunami warnings.

The eruption and its ensuing tsunami are believed to have displaced people, severed communications and suspended flights, though there has been no immediate report so far of injuries or damage due to Tonga’s current disrupted internet access to the outside.

As eruptions may continue, countries have voiced concern over disaster-hit Tonga and a potential climate fallout, while pledging aid for the country.

According to Tonga’s news website Matangi Tonga Online, Friday’s volcanic eruption continued for over 12 hours and the volcano also erupted for eight minutes on Saturday, sending plumes of ash into the sky.

The Royal Palace grounds, the waterfront and main street were flooded in the capital city of Nuku’alofa, but information about the extent of damage in the island country is unavailable because its communication with the outside world has been cut off since Saturday evening as a result of the volcanic eruptions.

Taaniela Kula, head of Tonga’s Geological Services, said the eruption was about seven times more powerful than the last one on Dec. 20, 2021.

Shane Cronin, a professor of Earth Sciences at University of Auckland, New Zealand, said the eruption was one of the biggest in Tonga in the past three decades.

“The most remarkable thing about it is how rapidly and violently it is spread.”

“The shock waves caused the changes in atmospheric pressure, traveling all the way to Japan, creating waves that move up and down in short periods,”
Japanese newspaper Yomiuri Shimbun quoted Fumihiko Imamura, a tsunami engineering expert at Tohoku University, as saying.

Experts said that it is not clear whether the eruption has reached its peak, warning of the possibility of further eruptions and their potential impact on the climate with the release of carbon dioxide and sulfur dioxide which may encumber humanity’s efforts towards a greener future.

The eruption of the undersea volcano has wreaked havoc in Tonga and adjacent waters, triggering abnormal seawater activities along the coastline of other countries. So far, tsunami warnings have also been issued in Japan, the United States, Canada, New Zealand, Fiji, Samoa, Vanuatu, Australia and Chile.

Tonga issued on Saturday afternoon another nationwide tsunami warning following a national tsunami marine warning early on Friday, warning Tongans to stay away from coastal areas, after swirling abnormal tides drew crowds to the Nuku’alofa waterfront. All domestic flights in Tonga were cancelled on Saturday in consequence.

New Zealand’s National Emergency Management Agency issued on Saturday a tsunami warning, saying in a statement that areas on the north and east coast of the North Island and the Chatham Islands are expected to experience “strong and unusual currents and unpredictable surges at the shore.”

Australia’s Bureau of Meteorology issued a marine threat warning for parts of New South Wales, Queensland, Tasmania and Victoria as a result of the eruption in Tonga. The Japan Meteorological Agency issued a tsunami warning for Japan’s Pacific coast and urged residents to evacuate from seaside areas. The United States National Tsunami Warning Center has said in a bulletin that California, Oregon, and Washington state, as well as parts of Hawaii, south Alaska and the Aleutian islands were all expected to be affected by the huge eruption in Tonga.

Though the agency later canceled warnings for American Samoa and Hawaii, it deemed the tsunami a threat for parts of the Pacific near the volcano, warning residents living near beaches, harbors, marinas and other coastal areas to move away from the shore and make their way inland or uphill.

United Nations Secretary-General Antonio Guterres on Saturday expressed his deep concern over the eruption and its ensuing tsunami and ashes.

“The United Nations offices in the Pacific are closely monitoring the situation and are on standby to provide support if requested. The secretary-general is grateful to countries that have already offered their support,”

Farhan Haq, deputy spokesperson for the secretary-general, said in a statement. New Zealand Prime Minister Jacinda Ardern told reporters on Sunday that “damage assessments are under way and New Zealand has formally offered to provide assistance to Tonga.”

China is closely watching the volcanic eruptions and ensuing disasters including tsunami and volcanic ash in Tonga, and stands ready to provide every possible support and assistance at Tonga’s request, Foreign Ministry Spokesperson Wang Wenbin said on Sunday.