Ekiti 2022: Fayose at centre of fresh crisis in PDP 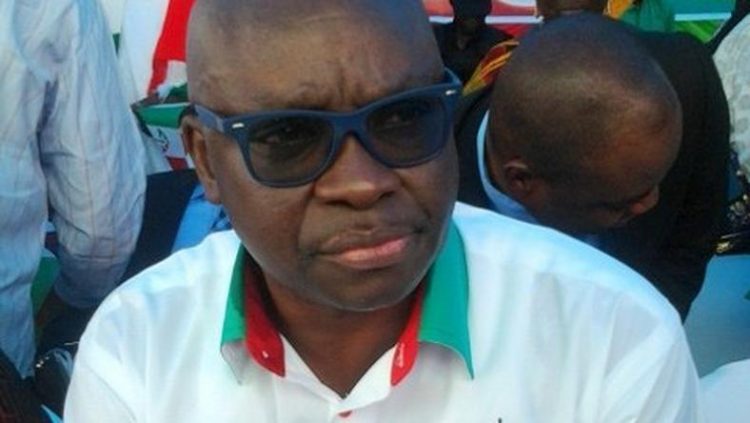 Already, some members of the party in under the auspices of Ekiti Political Intervention Coalition(EPIC) have called on the National Working Committee, NWC to suspend former Governor Ayodele Fayose for allegedly stage-managing the rigging the ad hoc delegate congress.

Delegates who will vote at the primary to elect the governorship candidate of the party for Ekiti June 18, 2022 governorship election were elected at the ad hoc congress.

Three ad hoc delegates were elected in each of the 177 wards across the State.

The aspirants leaders accused the committee set up by the party to supervise the congress led by Akwa Ibom Governor, Emmanuel Udom of allegedly working for Fayose to hijack the process.

Oni said: “What you have seen today is laughable. And this is the standard we still are as a country. It is very unfortunate. There is nothing we can do other than to complain formally. We went upstairs and also told the acting Chairman of the ward congress panel. I believe we cannot have democracy by hijack.

“If anybody is a muscle man, he should apply the muscle to win people for the party.

“We would believe the party will take a look at what has happened. At least all spoke on our honour and if they want us to say more they can contact us.

”Each of us is a known face to even the people in Abuja. This is very unfortunate but we hope the party will find a way out of it.

“Before we were getting it right. We were talking across all divides and we believe we would end up together but what has happened today has shown that there is a big problem. Let me sound it that we politicians are testing the will of the people too much.

”If anybody believes he is a muscle man who can wrestle the process out of the grip of the people, let him wait for them. And I believe they will wait for him at an appropriate corner. We must all join hands to rescue this country from this type of politics”.

Speaking in the same vein Olujimi said, “For me, this is a repeat performance of the congress. And this was how it was on March 7, 2020. And that is what we have been fighting for on till now. And it has repeated itself. Everything hijacked and everybody compromised”, she said.

But the Congress Panel Secretary, Mr. Kola Ologbondiyan, who debunked the allegations, said the committee didn’t bend the rules to favour any of the factions.

“What we have done is in line with the directive we have been given from Abuja. We did distribution in the presence of the aspirants.

“The aspirants would have to wait for the appeal committee if they have issues with the conduct of the congress. Our men are on the field, so we will act on all they give to us. PDP is a democratic party and if they have issues, we have an internal mechanism to settle all our differences.

“It is not our responsibility to go and monitor congress. The aspirants brought two agents each to supervise the accreditation and distribution processes. They were part of the meeting where accreditation was done. As we speak no report has been given to us. PDP is a family and we have the mechanism to settle our differences”.

But in a statement on Sunday EPIC sated that the congress was roundly rejected by stakeholders, because it was not conducted by National Committee chaired by the Governor of Akwa Ibom State, Mr. Udom Emmanuel set up for the purpose.

The group in a statement signed by its Publicity Secretary, Hon. Banji Dada, asked the National Chairman of the party, Dr. Iyorchia Ayu, to cancel the congress which it described as a charade.

“We expect Senator Ayu- led National Working Committee to rise to the occasion and ensure the nullification of the entire process and ensure the suspension of Ayodele Fayose from the party”.

“However, what we do not expect was the extent of culpability of the five-man ad-hoc committee sent by the National Working Committee of the party, which was led by an impostor.

“We wish to inform the NWC, and the entire leadership of the party that the ad-hoc election exercise to nominate three-person delegates was led and conducted by an interloper and someone unknown to law and the directive of the party.

“While the party announced H.E. Chief Udom Emmanuel as the chairman of the committee but strangely, the exercise was, however, conducted by a different person, an impostor called Emmanuel Enoidem, the immediate past National Legal Adviser of the PDP.

“This Emmanuel Enoidem was not listed and recognised by the NWC to be the Chairman of the Ekiti Ad-hoc delegates exercise, based on its official announcement, which has now rendered the entire exercise a nullity”.

“Large number of the committee members sent to Ekiti for the congress, had served under Uche Secondus led NWC described as tax collectors by Gov Nyesome Wike, while they also tried to frustrate Gov Makinde of Oyo State over the Southwest zonal executives.

“Some of them are known loyalists of Fayose and have enjoyed his patronage. There was no ad-hoc election known to law in the entire 177 wards in Ekiti State, except for an afterthought kangaroo arrangement in a few locations where some persons were told to start jubilating on camera shouting “Oshoko” to justify the electoral robbery. The entire exercise was a mockery cooked up to impose an aspirant on the PDP in Ekiti state”, the group stated.