No date yet for Joshua, Usyk rematch, promoter gives update 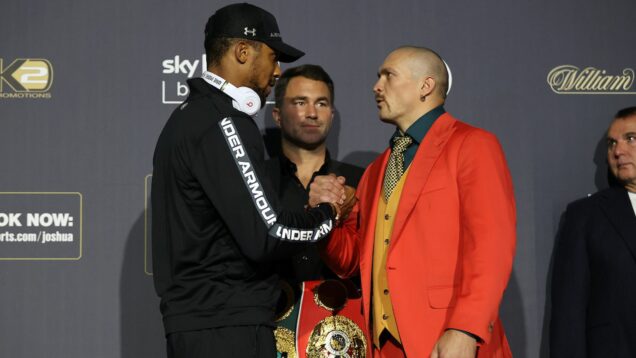 Joshua, Usyuk during face off

Alexander Krassyuk, promoter to boxing champion Olexander Usyk has said that so far there is no date or venue fixed for the rematch between Anthony Joshua and Usyk.

He confirmed to Sky Sports that many things are happening so they would unveil everything later.

When asked if Joshua was the only fight Usyk was considering, the promoter described it as a basic option.

Ever since Usyk defeated Joshua in September 2021, the rematch has been the preferred option for the Ukrainian according to his promoter.

Joshua triggered the rematch clause to fight Usyk again to get back his IBF, WFB and WBO heavyweight championship.

However, since Joshua lost, details around their rematch has not been concluded.

Tyson Fury who wanted to fight Joshua in a unification fight has continued to taunt the Nigerian saying he does not have the bottle to fight Usyk again.

He tips Usyk to defeat Joshua again in the rematch.