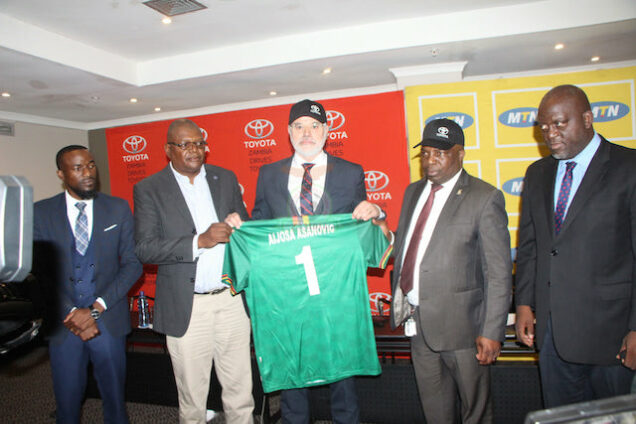 Aljosa Asanovic with officials of Football Association of Zambia (FAZ)

The Croatian, who recently served as the technical advisor for the Zambia team, has signed a four-year contract to be head coach.

He was unveiled by the Football Association of Zambia (FAZ) during a press briefing at Football House in Lusaka.

He was one of the best players in the Yugoslav First League, emerging as one of five top scorers during the 1989-1990 season with 14 goals.

He is best known for his career in the mid-to-late 1990s when he played for Derby County in the Premier League and for Croatia’s national team during Euro 1996 and the 1998 FIFA World Cup.

He also scored the first goal in the modern history of the Croatia team.

FAZ General Secretary Adrian Kashala said the mandate of the coach would be to ensure that the team qualifies for the next Africa Cup of Nations.

He added there will be no excuse if the team fails to qualify, because the coach has enough time to build a team and start preparations.

For his part, Asanovic said he was fully aware of the task ahead and that he had already identified the players he will be working with.

The draw for the 2023 qualifying groups will be conducted on January 23.