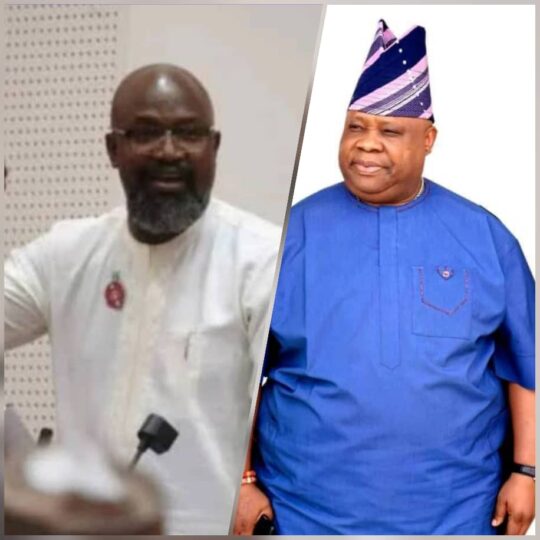 There are fresh indications of a split in the Adeleke family over the Osun State governorship election scheduled for July 16, 2022.

Two members of the family- Dele Adeleke and Ademola Adeleke- are challenging for the governorship ticket of the People’s Democratic Party.

Sources confirmed that some family members support Dele Adeleke while others want him to step down for his uncle Ademola who was the governorship candidate for PDP in 2018.

One of the family members, who is clearly not in support of Dele’s ambition is David Adeleke popularly known as Davido.

The Nigerian singer has been at his cousin’s throat over his ambition to become the governor of Osun State.

The singer added that Dele Adeleke has never achieved anything in life on his own.

“Wonderful! Me I finished uni with a 2:1. But it’s now cousin dele who struggled to even get a 2:2 that is now forming “intellectual”. Intellectual that has not succeeded in building one single thing in his life on his own. This life ehn! Osun Beware of FAKES! @deleadeleke001,” Davido wrote on Twitter.

In response to the post, Ademola told his nephew Davido not to worry about Dele.

Dele Adeleke, who supported his uncle in 2018, in a recent interview said he is now more competent than Ademola Adeleke.

Dele, whose mantra is Igba Otun tide (A new era has come), said he believes he is best suited to run the affairs of the Osun State government at this point.

He noted that he discussed his intention to run with his uncle because it was about competence, Osun State, and not the Adeleke family.

When asked about Ademola’s reaction, Dele said: “He was shocked, I believe but it wasn’t a face-to-face conversation.”

Dele, who later made it clear that he doesn’t want to say too much about Ademola, said: “I’ve always had a heart for service and I have embraced every opportunity to serve. Even though I have not been on the ballot for any elective position but I have served in so many political supports capacity and it started way back in 2007. I have been actively involved in politics. I have been playing the engine room, the backroom role, supportive role and I have played it beyond Osun. I believe all these have prepared me for the operations of the political landscape.”

Dele also said that his aspiration is from “massive calls to service from youth in Osun, different sectors across the state, political stakeholders within and outside the state saying hey come and do this, we can see in you, this ability to do this, Why are you running away, why are you shying from these responsibilities? And these calls didn’t just start, it has been going for so long in the background.”

He added: “The truth is that prosperity is there to judge us.

“What happens if peradventure I do not throw my hat in the race, PDP doesn’t get the opportunity of producing a formidable candidate and the PDP gets to lose this election and Osun State gets worse?”

N:B: You can reach the author of this article here