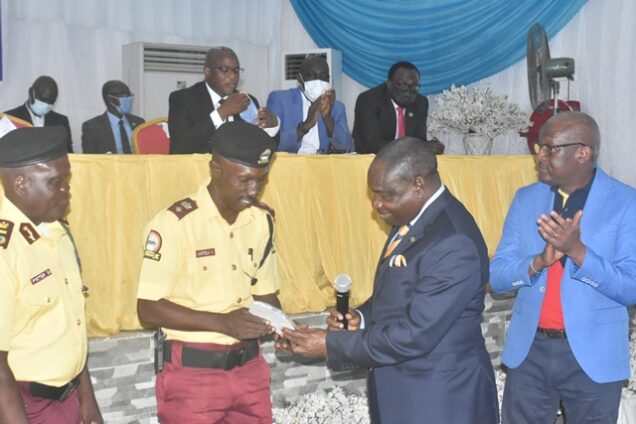 The Lagos State Government on Tuesday said the establishment of Lagos Traffic Radio 96.1FM and the Lagos State Traffic Management Authority (LASTMA), is a well-thought-out intervention by the state government to tackle the menace of traffic congestion.

Omotoso said the event presented a potent avenue for capacity building for the two prime agencies, saying this was  indeed, very significant because the engagement provided a potent platform for the two organisations to synergize, strategise and build on their hitherto work relationship, which has delivered laudable impact in the management of traffic challenges.

“I must state here that the establishment of both agencies is a strategic intervention for traffic decongestion. The birth of LASTMA in the year 2000 has helped in managing the chaotic traffic that characterised Lagos in the 1970s to 2000,” he said.

Omotoso added that since LASTMA’s advent on the transportation scene, traffic management had gone a notch higher, reducing build-ups, which used to stretch several miles in the metropolis.

The commissioner stated that the Agency had also helped in reforming drivers through strict application of the road traffic law and promptly dealing with crashes in the ever-busy roads in Africa’s largest economy.

Omotoso reiterated that Lagos Traffic Radio was a child of necessity, saying that its flamboyant entry into the transport sector almost 10 years ago, was borne out of the need to provide the much-needed information that would help commuters plan their journeys in a bid to improve travel time across the city.

“And this, LTR96.1FM has done in an ornate fashion, providing life-saving traffic updates to teeming Lagosians, helping modify behavioral patterns of motorists through its very robust content and serving as an impeccable channel of feedback for government policies and programmes,” Omotoso said.

Commissioner of Transportation, Dr. Frederic Oladeinde, described the role of both agencies as life-saving, not only to residents of the State, but also motorists plying the various roads and high ways across the metropolis.

Oladeinde, who was represented by the Director of Transportation, Azeeez Toriola, said the present administration would not rest on its oars until road users enjoy free-flow of traffic and that this was evident in the various investments in transport infrastructure in the State.

According to him, “The theme of the engagement, ‘Repositioning of Traffic Information Agencies for Better Performances’ cannot, therefore, be more appropriate. It would be stating the obvious to observe that one of the focal points of the T.H.E.M.E.S Agenda of the present Administration is Traffic Management & Transportation which is, indeed, the first pillar of the Agenda.

“Road Transportation, as we all know, is the most commonly used form of transportation in the world. And the importance of a forum such as this is further underscored by the status of Lagos as a mega City and one of the fastest growing cities in the world.

“Therefore, engagement fora such as this one, I believe, would offer various stakeholders in transportation sector the opportunity to come up with different workable ideas that would be beneficial to the Traffic Information Agencies in the State.”

General Manager, Lagos Traffic Radio 96.1FM, Tayo Akanle, said the event was unique because it was the first time such an official engagement would be holding between the two Agencies, despite the cordial relationship which started 10 years ago.

He said, arguably, both agencies formed one of the strongest partnerships in the Lagos State Public Service as at today.

Akanle said there was the dire need to interrogate the process of bringing forth traffic information, to come up with practicable solutions to challenges therein and ultimately improve the service delivery.

He added that value to motorists /commuters in Lagos, which was basically the reason for the engagement, would be robustly explored.

Akanle stated that the leadership of both Agencies would do all that was necessary to encourage all members of their teams to achieve the best in terms of service delivery.

The highpoint of the event was the presentation of awards to outstanding programmes department staff of both Agencies.