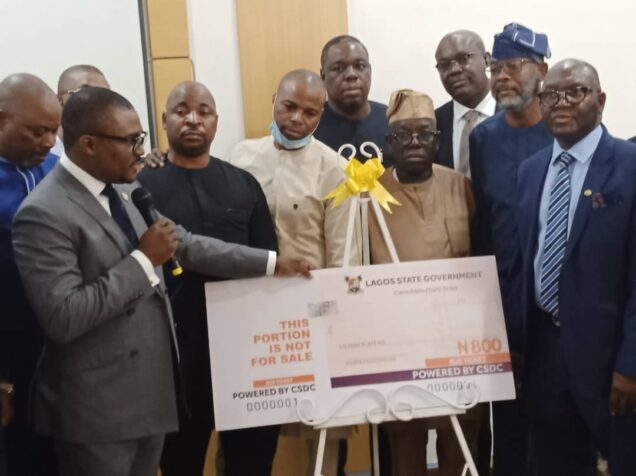 Olowo and others at the unveiling of the N800 levy

The Lagos State Government has signed an agreement for the collection of Informal Transport Sector Levy to harmonise dues collected by government from commercial motorists at parks and garages across the State.

The government signed the agreement with the National Union of Road Transport Workers, NURTW, Road Transport Employers Association of Nigeria, RTEAN, and others on Tuesday.

The levy will see each commercial driver in the state pay a consolidated levy of N800 to be shared among government agencies and local governments.

The agencies to share the N800 collected are LAWMA, LIRS, LASEPA, Ministry of Transportation, Local Governments, among others.

All commercial bus drivers will now be issued tax cards by the Lagos Internal Revenue Service, LIRS, annually for paying the N800 daily and roughly around N24,000 monthly.

At the signing of the agreement at the Bagauda Kaltho Press Centre, Alausa, Ikeja, Commissioner for Finance, Dr. Rabiu Olowo, explained that the fees covered monies for not just the local government alone, but also that of clearing waste from the motor parks paid to LAWMA, and pollution dues which was collected by LASEPA.

According to Olowo personal income taxes of the drivers would also be deducted from the levy.

“The consolidated transport levy will include the personal income tax of the drivers, include cost of taking care of parks, include money for Environmental Impact Assessment, EIA; LG money and others,” he said.

Olowo said the need to harmonise the transport collection levy process became paramount as other associations have template for collecting their dues.

He said from findings, a commercial bus driver pay as much as N3,000 as levy on daily basis to the various unions and government agencies, saying that has now been pegged at N800 per driver.

“We want to reduce the fees payable. The levy will consolidate all levies; we want to build a reliable data base to know those who are doing businesses in our state. Bus drivers will get tax card. We want to bring about collaborative effort. It is imperative for Lagosians to know this is a remarkable achievement. An average danfo driver pay N3,000 daily. Once they pay from the point of entry, that is all. It is N800 charge per day.