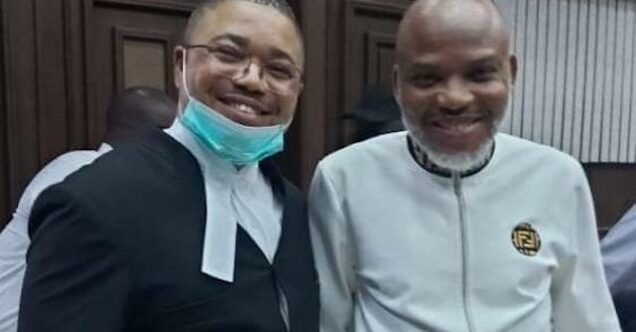 Barrister Ifeanyi Ejiofor, Nnamdi Kanu’s lawyer, who visited the IPOB leader in DSS detention today, described the fresh 15 count charge the worst abuse ever of court process and a joke taken too far.

“Today, we were served with a 15-Count Amended Charge filed by the Director of Public Prosecution of the Federation in respect of a case already scheduled tomorrow, for the hearing of our Preliminary objection challenging the competence of the 7-Count Amended Charge.

“This is indeed a joke taken too far as the Federal Government of Nigeria (FGN) is now scouting for an opportunity to truncate tomorrow’s proceeding, knowing fully well that the smokescreen charge is dead on arrival.

“We wish to categorically point out with dismay, that this further Amended Charge is the WORST kind of abuse of legal process that we have encountered in the history of legal practice – either in Nigeria or anywhere in the world.

“This 15-Count Amended Charge was no doubt brought in bad faith and is aimed at needlessly prolonging proceedings in the cause. The same FGN that brought our Client to Court is needlessly initiating processes that will delay the trial.

“It is worthy to note that an Amended 7-Count Charge had earlier been filed against Onyendu Mazi Nnamdi Kanu since October 2021, pursuant to which a preliminary objection was raised against this 7-Count Amended Charge. The parties have fully filed and exchanged processes and arguments on the objection, and the same has been set down for hearing.

“Although the prosecution has the liberty to amend a charge, it cannot exercise that prerogative to abuse the process of the court, or to supplant an objection that has been raised against an earlier amendment, which has not been decided on, or to overreach the defence, or to render nugatory or as a fait accompli, the decision of the court on a pending preliminary objection against an Amended Charge that is yet to be determined.

“Nevertheless, we herein assure UmuChineke that we have already devised a solution to every of their antics, it will only end in court, they can only run thus far.

“We therefore, urge you all to await the legal fireworks in court tomorrow. There must be light at the end of the tunnel”.

The Federal Government, on Monday, filed the fresh 15-count charge against the detained leader of the proscribed Indigenous People of Biafra (IPOB), Nnamdi Kanu.

The Office of the Attorney-General of the Federation (AGF), in the amended application, filed before a Federal High Court, Abuja, presided over by Justice Binta Nyako, increased the counts from seven to 15.

According to the News Agency of Nigeria (NAN), the amended charge marked FHC/ABJ/CR/383/2015 was signed by the Director of Public Prosecution (DPP), M. B. Abubakar.

The IPOB leader, who has been facing a seven-count treasonable felony charge, is expected to enter his fresh plea to the 15 counts on Jan. 19 when the matter will come up for hearing.

NAN reports that the court had, on Dec. 2, 2021, fixed Tuesday 18 January to hear some pending applications filed by the prosecution and the defence.

Count One of the charge reads: “That you Nnamdi Kanu, Male, Adult, of Afatanukwu Ibeku, Umuahia North Local Government Area of Abia State sometimes in 2021 being a member and leader of Indigenous People of Biafra, IPOB, a proscribed Organisation, did commit an act in furtherance of an act of Terrorism against the Federal Republic of Nigeria and the People of Nigeria by making a broadcast received and heard in Nigeria within the jurisdiction of this Honourable Court, with intent to intimidate the population and you threatened that people will die, the whole world will stand still and you thereby committed an offence punishable under Section 1(2)(b) of the Terrorism Prevention Amendment Act, 2013.”

Count two reads: “That you Nnamdi Kanu, Male, Adult, of Afatanukwu Ibeku, Umuahia North Local Government Area of Abia State on diverse dates between the month of March and April 2015 imported into Nigeria and kept in Ubulisiuzor in Ihiala Local Government Area of Anambra State within the jurisdiction of this Honourable Court, a Radio Transmitter known as Tram 50L concealed in a container of used household items which you declared as used household items, and you thereby committed an offence contrary to section 47(2)(a) of Criminal Code Act, Cap, C45 Laws of the Federation of Nigeria 2004.”