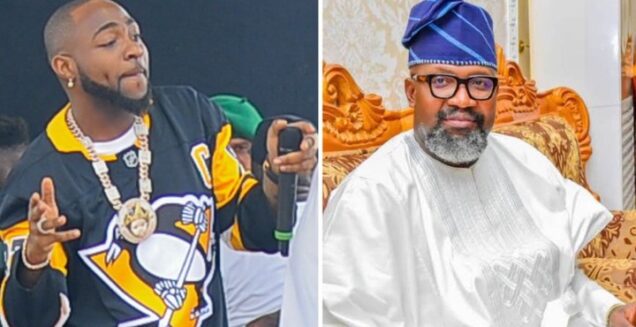 Davido, a popular Nigerian singer with the real name David Adeleke, took to his social media page on Tuesday to insult his cousin Dele Adeleke.

Davido said Dele Adeleke, who has declared interest in running for the office of Executive Governor of Osun State, is fake and has not succeeded in building one single thing in his life on his own.

Reacting to a picture of his cousin holding a provisional clearance certificate from the Peoples Democratic Party (PDP), Davido wrote;

“Wonderful! Me I finished uni with a 2:1. But it’s now cousin Dele who struggled to even get a 2:2 that is now forming “intellectual”. Intellectual that has not succeeded in building one single thing in his life on his own. This life ehn! Osun beware of [email protected]”

Dele Adeleke had earlier put a message on social media saying: “Intelligence & Understanding can not be falsified, stolen or handed to anyone on a silver platter. It takes dedication, patience and discipline to attain such feat.” “It is up to the party members to identify and support an intelligent aspirant among the lot. We can do better in Osun state! #IgbaOtunTiDe”

This was evidence that there are cracks in the Adeleke family over who should run for the office of the Governor of Osun state under the platform of the PDP.

As it stands, Dele Adeleke is challenging his uncle Ademola Adeleke for the ticket of the People’s Democratic Party ahead of the Osun 2022 governorship election.

Mr Adeleke in a recent interview with Channels said he is more competent than his uncle, who was the governorship candidate for PDP in 2018.

He added that being Senator Adeleke’s nephew should not hamper his aspiration to serve the people of the state.

He also noted that his aspiration is a result of the “massive call to service from youth in Osun and different sectors across the state”.

He noted that some stakeholders have charged him not to shy away from “this social responsibility”.

“And these calls didn’t just start. These calls have been going for long and I have been saying no.”

He added: “The truth is that prosperity is there to judge us.

“What happens if peradventure I do not throw my hat in the race, PDP doesn’t get the opportunity of producing a formidable candidate and the PDP gets to lose this election and Osun State gets worse?”