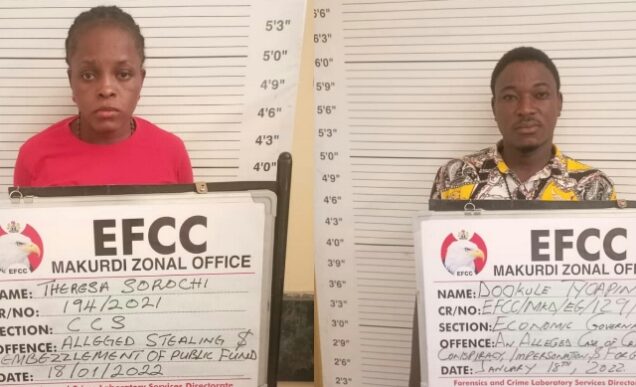 The Benue Zonal Command of the Economic and Financial Crimes Commission (EFCC), on Tuesday, January 18, 2022 arraigned the duo of Amohu Sorochi Theresa and Dookule Tyoapine on separate charges before Justice A. I. Ityonyiman of the Benue State High Court, sitting in Makurdi.

Theresa was arraigned on one-count charge for dishonestly converting N4,826,150.00 being part of daily contributions paid by customers.

The charge reads, “That you Amohu Sorochi Theresa while being the Cash Operation Finance Manager of Divinebase Transactions Services “a registered business name” sometime in 2021 at Makurdi, within the jurisdiction of this Honourable Court, did dishonestly convert the sum of Four Million, Eight Hundred and Twenty Six Thousand, One Hundred and Fifty Naira (N4,826,150.00) only, being part of the daily contributions paid by customers through you in favour of the said Divinebase Transactions Services and thereby committed an offence contrary to section 309 of the Penal Code Cap. 124 (Revised Edition) Law of Benue State, 2004 and punishable under section 310 of the same Law”.

Dookule was docked on two-count charge for dishonestly inducing members of the public to purchase fake receipts from him, purporting the same to have emanated from Benue Internal Revenue Services (BIRS).

The charge reads, “That you Dookule Tyoapine, sometime in April, 2021, at Hugh Vandekya Local Government of Benue State within the jurisdiction of this Honourable Court, did dishonestly make false documents purporting same to have emanated from the Benue Internal Revenue Services (BIRS) system platform powered by Fred Oluka which you knew was false and thereby committed an offence contrary to section 364 and punishable under section 365 of the penal Code Cap. 124 (Revised Edition) Laws of Benue State 2004”.

The defendants pleaded “not guilty” to the charges. The prosecuting counsel, Ramiah O. Ikhanaede consequently asked the Court for a date to commence trial.

However, counsel to the defendants, Polycap Aonde and M. O. Ozueh urged the court to admit their clients to bail on most liberal terms, noting that the defendants have been on EFCC’s administrative bail.

The cases were adjourned till February 22, 2022 for trial to commence.