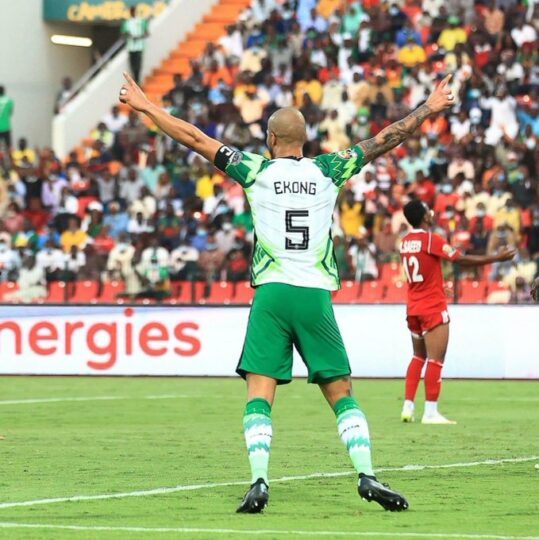 The Super Eagles of Nigeria thrashed Guinea Bissau 2-0 on Wednesday to claim maximum nine points to top Group D at the ongoing AFCON in Cameroon.

After a barren first half, the Eagles opened scoring on 56 minutes through Umar Sadiq .

Sadiq had acres of space after latching on to a precise pass into the box. He did not hesitate to unleash a great effort which ended up in the bottom left corner.
It was a well deserved goal as the Nigerian side had dominated play from the beginning of the match.
William Troost-Ekong doubled Nigeria’s lead, tapping home from almost on the goal line after a lucky rebound fell at his feet.
Moses Simon started the move by latching onto a pass and let fly at goal from the edge of the box. The shot beat the keeper but smashed against the crossbar, but Ekong tapped in the goal.
The referee ruled out the goal for offside initially, but after a review by VAR, it was given.
The Egypt came second with six points after beating Sudan 1-0 in the other game of Group D.
Tags:   Guinea Bissau   Super eagles