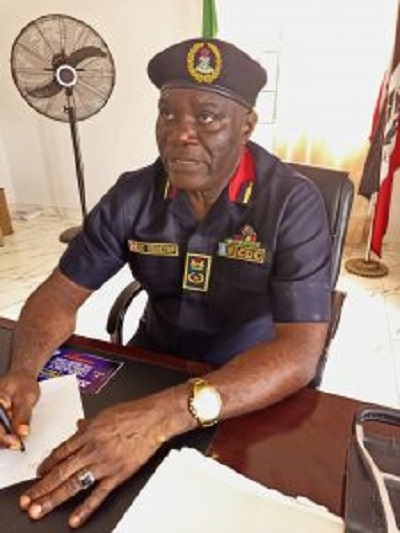 Mr Aniekan Udoeyop, State Commandant, NSCDC, Edo, briefing the media on arrest of illegal miners in the state, on Wednesday in Benin.

The Edo Command of the Nigerian Security and Civil Defense Corps (NSCDC) on Wednesday continued its clampdown on illegal miners in the state with the arrest of four suspected gold miners.

Mr Aniekan Udoeyop, Commandant of the corps in the state, made the disclosure while briefing newsmen in his office in Benin.

He said the latest arrest brings to 14, the number of suspects arrested for illegal mining in the state in less than two weeks.

Udoeyop disclosed that three of the suspects were arrested on Monday and one on Tuesday at Ojirame in Akoko-Edo Local Government Area of the state.

He stressed that the ban on mining earlier imposed by the state government was still in force, and warned against any violation of the ban.

The commandant recalled that the ban was imposed by the government to avoid security challenges following the influx of strangers to the locality.

Udoeyop said that those arrested would be charged to court to serve as deterrent to others who would engage in the illegal venture.

The command had earlier arrested four suspects on Jan. 7, and six others on Jan. 13.