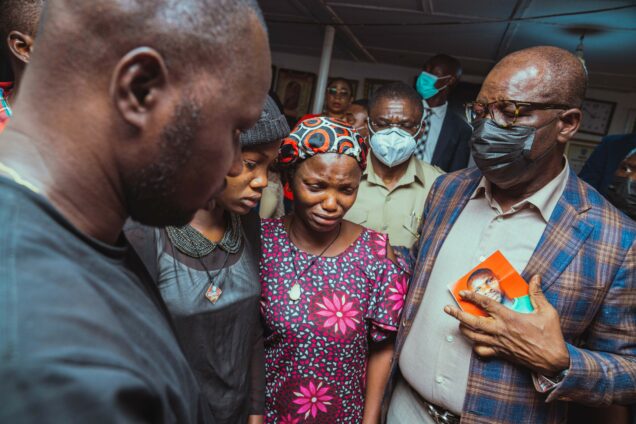 Governor Godwin Obaseki on Wednesday led top government officials on a condolence visit to the State Tipper Drivers Association, over the death of their member, Mr Austin Esangbedo.

Esangbedo was allegedly killed by personnel of the Department of State Services (DSS) in the State.

Speaking at their Ikpoba Slope secretariat, Obaseki said his government will pay the hospital bill of victims who sustained injuries during the clash on Tuesday.

He said: “We are here this afternoon to condole with you, for the loss of your member and what happened yesterday.

“I want to thank you for the peaceful way you conducted yourselves; if not for the respect and regard you have for our government, I know what you would have done.

“So, I want to thank and appreciate you. In life, many things that we do not plan happen and yesterday was one of those unfortunate days. I will like us to leave it like that, in the back. There is a lot I am doing that I can’t tell you now.

“You are part of the security architecture in Edo State; we know what you do for us here to help maintain the peace that we all enjoy in the state. We appreciate you; even if some other people do not appreciate you, we appreciate you. We cannot bring back life, let’s focus on the loved ones that the driver left behind.”

Obaseki continued: “Let us see how we can take care of the families of those who are currently at the hospital receiving treatment. Thank God they did not lose their lives. I will now make sure I pay all their bills for all their treatment.

“I came here this afternoon to plead for peace, to thank all of you for what you have been doing and tell you that we will never leave you. We will not let anybody come and intimidate you; just continue with your business honestly.”

“We will work with the association and give your dead member a befitting burial; we cannot replace him, but as government, we will investigate his death.”

Earlier, the Chairman of the Edo Tipper Drivers Association, Mr Austin Uhunmwangho, while giving the account of what transpired alleged that his men were on the road regulating traffic, while the DSS operatives were said to be driving against traffic in two vehicles and another Audi car.

“When our drivers identified the first vehicle as being occupied by the operatives, they allowed them to go and asked the Audi to go back. This got the operatives angry and on getting down from their vehicle, they shot one of our drivers dead,” Uhunmwangho alleged.

He further said the video evidence they had was taken away from them and their CCTV cameras were also tempered with.

Meanwhile, the Edo State Government has apologized to Edo residents over a tedious traffic jam in the state capital, Benin City, on Tuesday, regretting that the incident disrupted human and vehicular traffic in the state’s capital.

In a statement apologizing to residents in the state, the government said the traffic was a result of a dispute between some transporters and security agencies, which degenerated into a blockade of some roads.

According to the statement, “We apologise to the good people of Edo State who were subjected to a tedious traffic logjam on Tuesday, January 18, 2022, over a disagreement between some transporters and security agencies in the state.

“We regret the disruptions and stress caused by the gridlock. Officials of the Edo State Traffic Control and Management Agency (EDSTMA) have helped in managing the traffic situation so we can return to our normal lives.

“We express sincere apologies for the inconveniences the incident may have caused and urge you all to go about your lawful businesses with the assurance that government will continue to provide for adequate measures to ensure harmonious relations among all stakeholders in the state.”