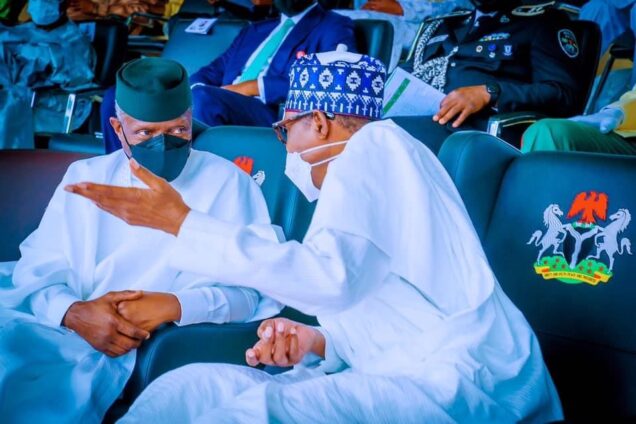 Members of the National Coalition of Women for Osinbajo have urged President Muhammadu Buhari and the entire members of the Federal Executive Council to adopt Yemi Osinbajo as APC’s consensus presidential candidate in 2023.

The coalition’s chairperson, Rabi Dauda, made the plea via a six-point declaration on Wednesday, while addressing reporters during a press conference in Abuja.

NCWO said the Vice President is one of the few Nigerian political aspirants who will not turn electoral victory into an opportunity for wealth accumulation.

The group noted that the 2023 general election would be a decisive turning point for APC and the entire nation.

The NCWO said, “We strongly affirm Nigerian women’s utmost confidence in the candidature of Professor Yemi Osinbajo as a people-focused leader with the suitable intellectual capacity and innate leadership qualities to move Nigeria forward, with emphatic attention to women progress and development.

“We demand the emergence of truly people-focused leadership at APC’s forthcoming convention and presidential primaries, either through consensus or voting processes, as we look forward to the unfettered emergence of Vice President Yemi Osinbajo as APC presidential flag bearer in 2023 elections.

“We strongly appeal to President Muhammadu Buhari, members of the Federal Executive Council, state governors, party leaders at federal, state, local government levels, and all genuine progressives among delegates to APC presidential convention to ensure the actualization of an Osinbajo presidency in 2023.”

The coalition also urged the APC Caretaker/Extraordinary Convention Planning Committee to strictly ensure that delegates to its national convention are not hijacked by those who have participated in looting state or federal resources in the past.

The group said, “Our great party, APC, must seriously consider women’s collective calls for greater involvement of women and youth in critical positions within the party as well as local, state and federal administrations to be constituted by APC in 2023.

“While we commend the very gallant efforts of the Nigerian military and various security and law enforcement agencies involved in tackling the menace of insecurity across the nation, we also appeal for increased pace towards ending the insurgency, banditry, kidnapping, and other crimes as women and children tend to be the worst affected victims of criminality and other anti-social acts.

“Lastly, we reaffirm our faith in one united Nigeria, with hopes for the genuine realization of its bright prospects under a people-focused leadership that only the APC can guarantee.”

It said, “Without any iota of doubt, we believe that the emergence of Prof. Yemi Osinbajo as the 2023 presidential flag-bearer of the APC will allow Nigeria to realize these lofty collective progressive aspirations.

“Nigerian women believe in the candidature of Prof Yemi Osinbajo, a man whose credibility, objectivity and intellectual capacity have been proven over time. There is a need for effective steps to be taken to ensure that those who engaged in plundering state and federal coffers in the past are not allowed back into governance roles where trust and integrity matters.”