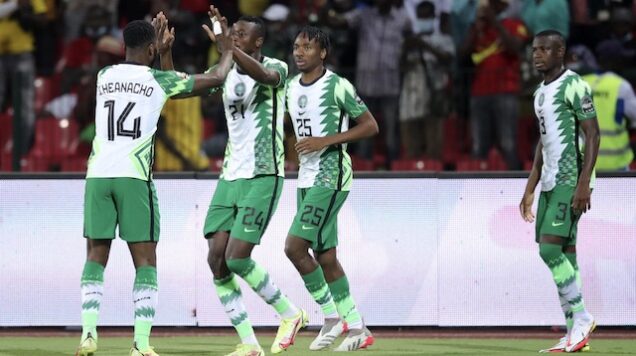 Players of Super Eagles at the ongoing AFCON 2021

Minister of Youth and Sports Development, Sunday Dare has commended the Super Eagles over the impressive win against Guinea-Bissau in the 2021 Africa Cup of Nations (AFCON) in Cameroon.

Super Eagles on Wednesday cruised to the knockout phase of the AFCON after a 2-0 win against Guinea Bissau to comfortably top Group D.

In a statement issued on Thursday, the Minister described the performance as impressive and consistent.

Dare said the team had posted commendable performances, exhibiting consistency in their run of play from the first game of the group through to the last.

“I salute the tenacity and resilience of our players and coaching crew that have made our resounding victories possible in the three group stage matches.

“We have seen our players take every game as it comes, with uncommon gusto and consistency. I hope they keep the fire burning and continue trudging on until we bring home the trophy,” Dare said.

The Super Eagles will now await the best of the third-placed teams in groups ‘B, E and F’ as their opponents in the next stage on Sunday in Garoua.