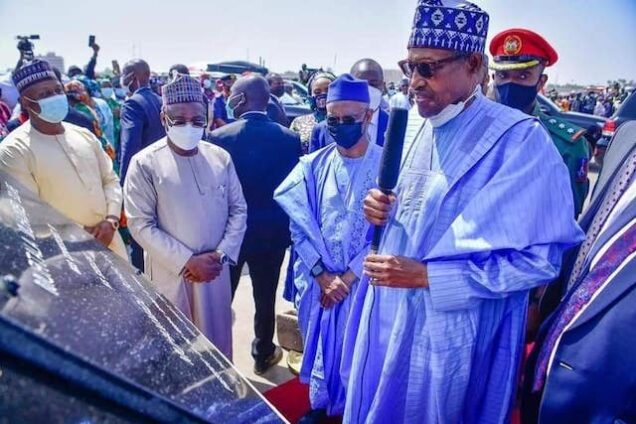 Buhari commission's one of El-Rufai's projects in Kaduna

President Muhammadu Buhari has dredged out memories of his narrow escape from a bomb blast near the Kawo bridge, while travelling to Katsina State in July 2014.

Buhari spoke at the newly constructed Kawo bridge executed by the El-Rufai administration.

Reminiscing on the unfortunate incident, which claimed the lives of many innocent Nigerians, the President said he remains grateful to God for sparing his life on that fateful day on Ali Akilu road, Kawo-Kaduna.

”For many years, I always plied this route and I cannot recount how many times I crossed it.

”There was an attempt on my life on this road. Nothing happened to me just like the 30 months I spent during the civil war.

”They wanted to blow up the vehicle I was in around the secretariat but my escort somehow stopped them.

“But before we came to this bridge (Kawo), they became more desperate and there was a small market in the area where the device exploded.

”But God protected us and here I am again,” he said.

He said his security escorts were vigilant.

The bombing at the time damaged three vehicles in Buhari’s convoy and injured three of his aides.

Buhari, shaken by the incident said it was an assassination attempt.

“I was personally involved in a clearly targeted bomb attack along Ali Akilu Road, Kawo-Kaduna at about 2:30pm on my way to Daura,” he wrote on 23 July 2014.

“The unfortunate event, clearly an assassination attempt, came from a fast-moving vehicle that made many attempts to overtake my security car but was blocked by my escort vehicle.

“We reached the market area of Kawo where he attempted to take advantage of our slowing down and attempted to ram my car and instantly detonated the bomb, which destroyed all the three vehicles in our convoy.

“Unfortunately, when I came out of my vehicle, I saw many dead bodies littered around. They were innocent people going about their daily businesses who became victims of mass murder.

“Thank God for His mercy, I came out unhurt but with three of my security staff sustaining minor injuries – they have since been treated in the hospital and discharged.”

The Kawo bridge has now been remodelled by Governor Nasir El-Rufai.

It is his signature project. It has three grand rotaries and access roads.

It has become a tourist attraction in Kaduna since its completion.

Buhari showered encomiums on El-Rufai for transforming Kaduna city and other towns in the state.

He said that the transformation of Kaduna metropolis was so massive that as a resident of metropolis, he could hardly find his way in the town.

“I have been in Kaduna all the time but can hardly find my way now; you have changed Kaduna.

“You are writing your history in letters of Gold,” Buhari told the governor while inaugurating the Murtala Muhammad Square.

He commended the governor for committing himself to changing the state, adding that people through out the country were appreciative of his effort.

In the metropolis, the President also commissioned the Barbedos fertilizer plant, a private sector investment in the State.

Speaking at the LEA Lokoja Primary School, the Governor said the project has now been renamed ‘‘Buhari mega-primary school.”

He noted that the people of Rigasa have been consistent in giving President Buhari 98 percent of their votes in previous presidential elections.

”They are the most committed Buharists in the country,” he said.

Gov. Nasir El-Rufai said the re-modeled Murtala Muhammed Square was first built in the 1970s and handed over to Kaduna state government by the Federal Government.

Buhari, who is on a two-day working visit, had earlier inaugurated some projects in Kafanchan and is expected in Zaria town on Friday, to inaugurate more projects.