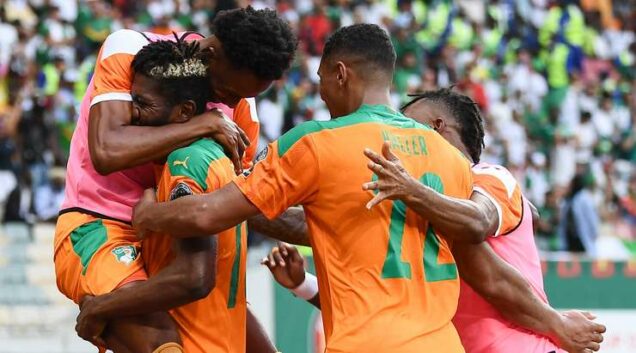 The Elephant of Ivory Coast have dumped defending champions, Algeria out of AFCON after thrashing them 3-1 in their last group game.

Algeria needed outright victory to stand a chance of progressing to the knockout stage, but it was the determined Ivory Coast side that carried the day.

Ivory Coast opened scoring on 22 minutes. Nicolas Pepe had seen his teammate and passed the ball to him. Franck Kessie beat the goalkeeper with a precise shot into the bottom left corner to make the score 1-0.

The West African’s second goal came on 39 minutes from a free-kick. Serge Aurier sent a cross in and Ibrahim Sangare leapt high to connect with it on the edge of the 6-yard box. His close-range header went low into the middle of the net.

Nicolas Pepe got the third goal for Ivory Coast, after latching on to a perfect pass and fired an excellent shot inside the left post.

Algeria got a consolation goal after Aissa Mandi found Sofiane Bendebka and he showed great determination to get to the ball and planted a header into the back of the net.

Earlier, Riyad Mahrez failed to score a penalty awarded to Algeria on 60 minutes, as his shot only hit the right post.

Ivory Coast scored two other goals, but they were ruled offside by the referee.