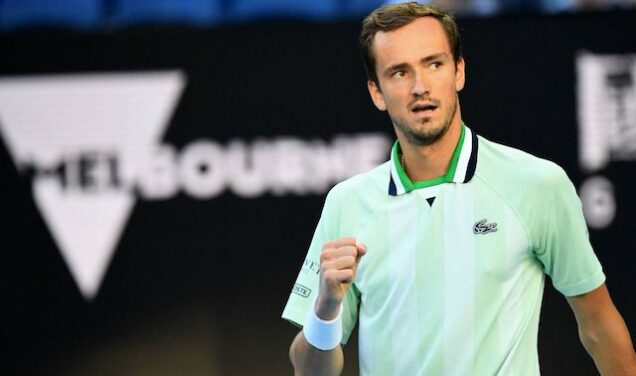 In the most riveting match of the day, Medvedev raced to a two set lead, despite having to contend with occasional ruthless play by Kyrgios and the noisy crowd rooting for him.

A capacity 50% crowd cheered on every Kyrgios point at a floodlit Rod Laver Arena but despite their fanatic support, the Australian maverick could not find a way past the U.S. Open champion who showed nerves of steel.

An inspired Kyrgios forced a break of serve in the third set to take the match into the fourth.

A double break in the fourth set made it look easy for last year’s Australian Open finalist.

He will next meet 57th-ranked Botic van de Zandschulp of the Netherlands for a place in the fourth round.

“I came to win this match and I am happy to do it,” said Medvedev. “It’s not easy when you get booed between the first and second serve. I had to stay calm.”

In the women’s event British No.1, Emma Raducanu was sent out by world No.98 Danka Kovinic.

Raducanu, the U.S. Open champion, was hampered by a blister on her right hand throughout as Kovinic reached the third round with a 6-4, 4-6, 6-3 victory.

Three time Grand Slam winner, Andy Murray may have played his last match at the Australian Open after he was dismissed in three sets, by Japanese qualifier Toro Daniel.

Daniel won 6-4 6-4 6-4.
.
A bitterly disappointed Andy Murray said he might not be back next year if his results this season didn’t match up to his expectations.

The 34-year-old Scot had high hopes of his return to Melbourne Park after an absence of two years but they were shattered by inspired Japanese qualifier Taro Daniel in three sets on John Cain Arena.

“I made way too many errors today. Yeah, wasn’t able to turn it around today, but he definitely was solid today. He moved well and deserved to win.”

Three years and two hip operations after he sat in the interview room tearfully proclaiming his career over, Murray said whether he returned to Melbourne Park in 2023 depended on how he got on at big events in 2022.