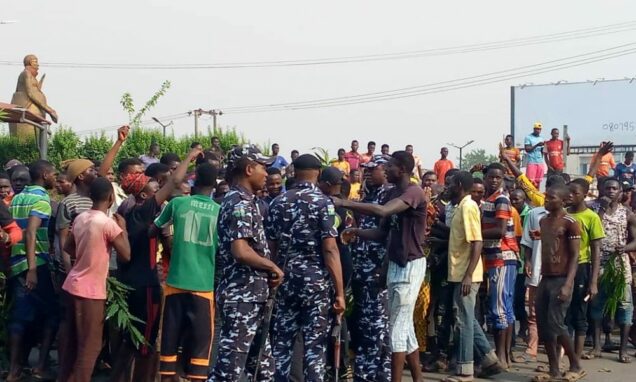 Wheelbarrow pushers during their protest in Benin, Edo State on Friday

Clash was averted on Friday, in Benin City, capital of Edo State, during a protest of alleged extortion by wheelbarrow pushers.

The protesters under the auspices of Wheelbarrow Pushers Association, are made up of pushers from northern Nigeria, who convey loads and goods for commuters between commercial vehicles drop-off points around the popular King’s Square, otherwise known as Ring Road and the Oba Market.

They alleged excessive billing and extortion by revenue collectors in the name of the government.

Their protest was compounded, as it coincided with the ‘End Hardship in Nigeria Campaign’ protest organised by The Peoples Alternative Movement in Benin.

The protesters who besieged the King’s Square by their numbers, stopped all members from working as a way to express their grievance.

Trouble started when they sighted a wheelbarrow pusher conveying loads, and swiftly charged at him in large number with a view to confiscate his wheelbarrow.

Prompt intervention by security operatives present in the vicinity however saved what could have resulted in violent clash.

One of the protesters who identified himself as Otunba Adebayo, said the revenue collectors started with N50 per day for a wheelbarrow, but later increased it to N700 a day.

Adebayo who claimed to be chairman of the association, added that about three different groups now collect revenue from them in the morning, afternoon and evening on a daily basis.

“We came out today for the protest because of the problem we have been facing in the Oba Market.

“When they started, they were collecting N50. From N50 it is now N700. We are not slaves, that is the reason for the protest. The money they are collecting from us is too much.

“Government didn’t ask them to collect N700 from anybody. Government did not also tell them to fight anybody or injure people in the market. The embarrassment is too much. If you go to hospital now, you will see a lot of the wheelbarrow pushers lying ill. Some of us have given up the trade.

“How much are we working? Some will rent wheelbarrow for N300 and work at most N3000 while some will not work as much as that. That is how we have been sustaining ourselves in the business. Those that work between N700 and N1000 a day, if you remove N300 how much will now be left for the person? Nothing.

“The protest will from today last till next week if government did not answer us or do something positive,” he vowed.