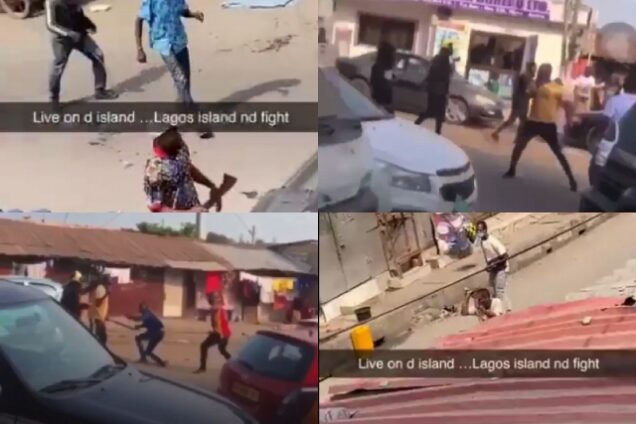 Idumota on Lagos Island is boiling as heavy gunshots have been witnessed in the area following bloody clash between rival hoodlums.

The incident began last night and spread to Friday morning, with hoodlums seen with dangerous weapons, such as cutlasses, guns, fighting themselves.

Some people have been feared killed in the gun-battle. Areas such as Idumota, Kosoko, Oluwole, Martins and Balogun have been deserted as street urchins engaged in bloody clash.

Security reports said there is heavy gunshots and serious fight on Lagos Island as Area boys were fighting themselves.

People have been warned to stay away from Lagos Island right now as the fight spreads to other areas, while officials of the Rapid Response Squad, RRS, and Task Force are trying to restore calm to the area.

The popular Idumota Market has been deserted as traders ran for their lives.

According to EONS Intelligence, as at 9,00am, the crisis in Idumota has escalated.

It said: “Violent attacks accompanied with sporadic shootings in Idumota area of Lagos State as hoodlums from the area clash with hoodlums from Kosoko/Oluwole, Martins and Balogun. The situation in the area is currently tensed.”

Footages on Twitter showed residents running helter and skelter, with sporadic gunshots heard. Hoodlums with cutlasses were also seen in the footages.