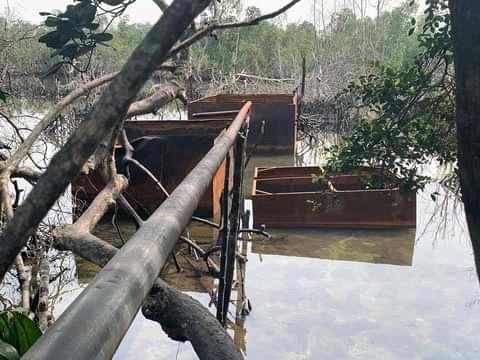 The Chairman of Emohua local government of Rivers, Dr Chidi Lloyd on Thursday led security personnel to destroy illegal oil bunkering sites in some communities in the council in continuation of the determination to end the menace of soot n the State.

The Council Chairman and his team also discovered a waterfront used as loading depot by illegal petroleum refiners in Oduoha-Emohua, where boats used to transport illegally refined petroleum products were intercepted and destroyed by the joint taskforce.

Dr. Lloyd during the raid effected the arrest of the youth leader of Oduoha community and two others for allegedly aiding oil bunkering activities in the community.

But he later released the three suspects to the paramount ruler of the community on personal recognition.

Meanwhile, Lloyd has offered N100,000 to anyone with reliable information that will lead to the discovery of any functional illegal petroleum refining site within Emohua local government area.

Speaking with Journalists, who joined him to the discover the oil bunkering sites situated in a river bank between Rumuodogo community in Emohua LGA and Harry’s town in Degema LGA, the council chairman assured that the government will ensure that any whistle-blower who provides reliable information to the taskforce is not disclosed to the perpetrators of illegal oil bunkering and the public, in order not to endanger their lives.

But he noted that the war requires the full involvement of the federal government, to complement the efforts of the governor of Rivers State, with a view to ending the ravaging soot pandemic in Rivers State.

He, however. warned that the government will not hesitate to confiscate any private property, including, buildings and land used for illegal oil bunkering activities within Emohua local government area.

The council chairman further commended the effort of the Nigeria Police, the Department of State Services,DSS, and the Nigeria security and Civil Defence Corps in the fight against oil bunkering activities, promising to continue to provide the necessary logistics to the security agencies, as well as the local government vigilante services.

The Port Harcourt Branch of NBA, in a statement signed by its Chairman, Prince Nyekwere, said the decisive action of the Governor towards taming the illicit activities of the operation of illegal refineries in the state has reduced the soot in the atmosphere.

Prince Nyekwere said the soot in Rivers State has a negative impact on the environment and the health of residents in the state.

The NBA while commending the bold steps taken by the Rivers State Government promised to support the Governor in tackling the menace of illegal oil bunkering and artisanal oil refineries in the state.

He added that the suggestions raised by professionals during the branch’s Law Week last December on the topic: ‘The Menace of soots in Rivers State is yielding the desired results as evidenced by the Governor’s onslaught on operators of illegal oil refineries.