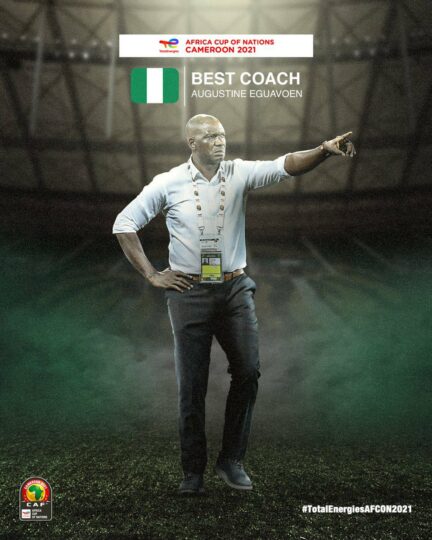 Confederation of African Football has named Austin Eguavoen as the Best Coach of the group stage of the ongoing African Cup of Nations.

Reacting to the development, Eguavoen thanked Nigerians and appeal for more support for his team.

He said; “Many thanks to the Confederation of African Football for this award.

“The Best coach of the Group stage. Wouldn’t have been possible without my fantastic group of players and colleagues.

“Thank you Nigerians, for your support. It’s needed now, more than ever.”

Eguavoen, 56, took over the Nigerian national team on an interim basis following the sack of former manager Gernot Rohr in late 2021.

The former international led the Eagles on a perfect record through the group stage, defeating Egypt 1-0, Sudan, 3-1, and Guinea-Bissau, 2-0, to top Group D.