Davido, Wizkid meet at nightclub, hug each other (video) 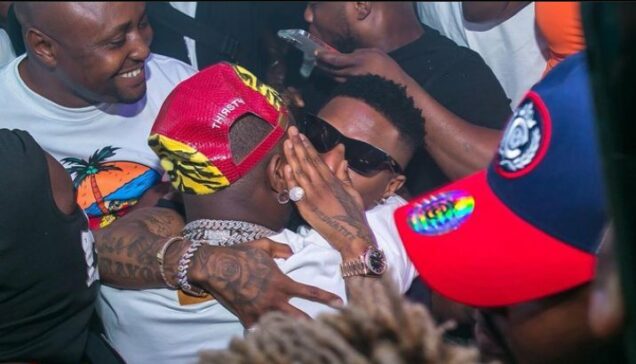 Wizkid and Davido at Quilox on Friday night

Nigerian superstars Davido and Wizkid on Friday night hugged each other after linking up at nightclub in Lagos.

The duo had been ignoring each other on social media for a longtime.

In the viral video, Davido approached Wizkid and they both hugged each other and exchanged pleasantries after a long time.

This is coming after Burna Boy announced he has settled his rift with Davido.

Davido and Burna Boy have been at loggerheads since the beginning of 2021.

According to the self-acclaimed African giant , Davido was trying him but they have figured things out.

Burna Boy further declared love for everyone, insisting that everyone must love each other by force in 2022.

“Davido was trying me but we figured it out. 2022 all of us must love ourselves by force. If not make we just kill ourselves

“No middle again, forward ever backward never. This is my last post of the year. God bless you all,” Burna Boy said.

This is not the first time Davido and Wizkid will been linking up to excite their fans.

In 2017, Wizkid brought Davido on stage during his concert at Eko Hotel and Davido returned the favour that same year at his concert.

However, they have been at loggerheads for years over reasons best known to them.

In November 2017 at the One Africa Music Festival held in Dubai, both camps of Davido and Wizkid got into a physical clash outside the venue of the music concert.

It was also reported that Wizkid was assaulted by one of the members of Davido’s crew.