I am now world's statesman: Full story of what Obasanjo told PDP leaders 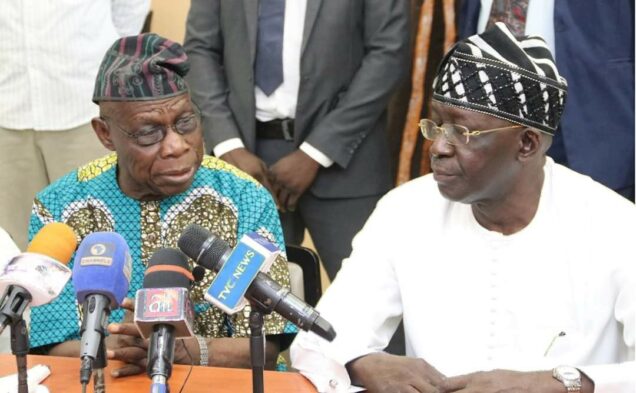 Former President Olusegun Obasanjo on Saturday restated his decision and commitment to stay off the party politics, saying nothing can make him return to party politics.

Obasanjo made his position known, while addressing newsmen shortly after a closed-door meeting with members of the National Working Committee (NWC) of the Peoples Democratic Party (PDP) in Abeokuta.

The former president said he was contented to remain as an elder statesman, adding that nothing would make him return to party politics.

“This is why I have the type of responsibility that I now have in the horn of Africa, which is not an easy thing,” the former president said.

He, however, said that PDP would continue to be part of his life history because he attained unto the position of the president of the country on the platform of the party.

Obasanjo explained that in spite of his retirement from party politics, he could not retire from his commitment to the welfare of the people.

He said: “I have been with the party right from inception.

“Whatever I do in my life, because I became president on the platform of PDP, the party will continue to be part of history of my life.

“I must, however, add that the day my ward decided to tear my PDP card, was the day I ceased to be a member of PDP. And that day, I vowed that I will no longer be a member of any political party.

“I will remain a statesman in Nigeria, West Africa, Africa and indeed in the world at large.

“Though, I have retired from partisan politics, but I cannot retire from the welfare and wellbeing of the people, whether in my own community, in my own state, in my own country, anywhere in Africa or indeed anywhere in the world.”

Obasanjo said that the PDP National Chairman, Iyorchia Ayu, has a huge responsibility in restoring the lost glory of the party, praying that God would grant him the wisdom to succeed.

In his remarks, Ayu said he considered it appropriate to visit Obasanjo with the party chieftains so that they could learn from his wealth of experiences.

The PDP chairman said that the tenure of Obasanjo as Nigeria’s president on the platform of the PDP, remained the golden era of the party.

“During that period, not only did you grow Nigeria’s economy to be the biggest in Africa, you were able to take the country away from slavery by negotiating and cancelling so much of its foreign debts.

“The Direct Foreign Investment (FDI) in the country was on the increase on daily basis with attendant respect for Nigeria from the international community.

“Most of the institutions and agencies set up during your tenure, including the Economic and Financial Crimes Commission (EFCC) and the Independent Corrupt Practices and Other Related Offences Commission (ICPC), are still useful in the country.

“You are very passionate about this country and you did a lot. So, we thought we should come and thank you for what you have done, not just for Nigerians, but also for our party and the African continent.

“I think today, in all modesty, after the departure of late President Nelson Mandela of South Africa, there remains only one person of such stature on the African continent.

“We are proud that the person is a Nigerian in the person of former President Olusegun Obasanjo.

Ayu, who described Obasanjo as a de-tribised leader, recalled that the elder statesman once told him that he (Obasanjo), would feel diminished, if anyone limits him to a particular tribe, rather than Nigeria as a country.

He explained that the thought had stuck in his head that he, and every Nigerian, has the responsibility to keep Nigeria united and take it to an enviable height.

“You cannot build a house and leave it to collapse.

“So, I want to plead with you, please don’t be tired of us as we come knocking, asking for your advice and wisdom because the words of elders are the words of wisdom,” he said