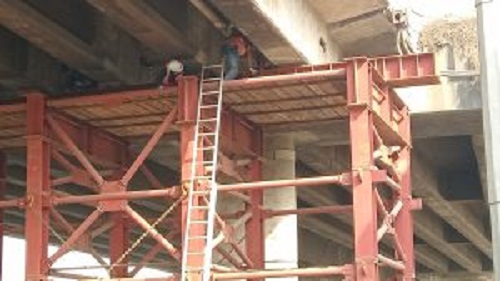 Ongoing rehabilitation of Marine Bridge in Apapa on Saturday in Lagos

The Federal Controller of Works in Lagos State, Mr Olukayode Popoola, on Saturday said the ongoing rehabilitation of the Marine Bridge in Apapa is 66 per cent completed.

Popoola, in Lagos, said that rehabilitation of the bridge was being done in phases.

The controller said that 24 expansion joints and 120 bearings had been replaced in previous phases.

He said in the new phase of rehabilitation works that began on Monday, 40 additional bearings and six expansion joints were being replaced.

“For this particular section that we just closed, we are going to replace 40 bearings and six numbers expansion joints.

“Previously, we have changed 120 bearings and 24 number expansion joints. The repair is a carryover from last year.

“The contract was awarded in September 2019, and the contractor started work in October 2019 with the rehabilitation of failed sections of the bridge.

“The contractor has achieved 66.19 per cent completion and so far.

“Repair works have been carried out on two sections of the bridge with the replacement of 120 bearings, 24 expansion joints and the resurfacing of 610m of asphalt.

“The partial closure of the bridge on Monday is to allow the contractor to rehabilitate the damaged section, which will involve the replacement of 40 bearings and six number expansion joints,’’ he said.

Popoola explained that the repair works in the new phase would be completed by April 2022.

He appealed to motorists to obey traffic regulations around the construction zone where traffic was partially diverted to avert gridlock.

A NAN correspondent who visited the construction site observed that lifting towers placed on Self Propelled Modular Trailers (SPMT) were being used to jerk up two sections of a bridge deck.

Construction workers were seen climbing through the lifting towers to work simultaneously under the bridge deck and its top surface on the Ijora bound carriageway.