Pandemonium in Yobe over driver killed by gunmen 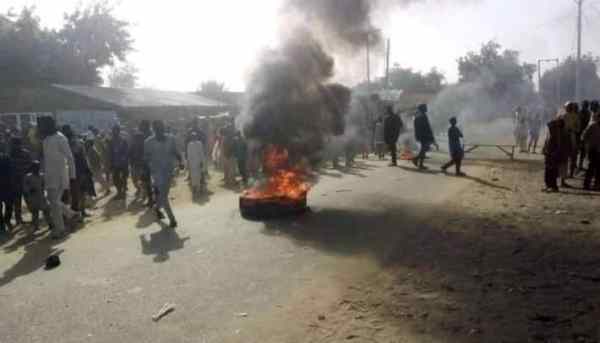 Protest in Yobe over killing of Mohammed Toli

The youths set tires and other property ablaze and demanded justice for the deceased whom they described as a peaceful and law-abiding person.

Toli was allegedly shot dead on Friday evening at a petrol station while scampering for safety when the armed men arrived on a motorcycle.

However, Gov. Mai Mala Buni of Yobe has ordered an investigation into the killing.

Buni, in a statement released on Saturday, described the incident as unfortunate after a long period of return of peace in the area and the state.

He said: “Government and the security authorities will not tolerate any act of recklessness capable of disrupting our hard-earned peace.

“I, therefore, assure you that the government will properly investigate the matter and deal with it decisively.

“I also appeal to our good people of Bade Local Government Area and the entire state to remain calm and law-abiding.

“We should avoid anything detrimental to our peace. You are advised to be good Muslims and take it as the will of Allah and avoid bonfires on the roads.

“May Allah (SWT) forgive the deceased of his shortcomings, grant him Aljannatur Firdaus and to his family, the fortitude to bear the loss.”

When contacted, the spokesman of the Police Command in Yobe, ASP Dungus Abdulkarim, confirmed that his officers have restored law and order in the area.

He said the matter was under investigation and anyone found wanting would face the full wrath of the law.