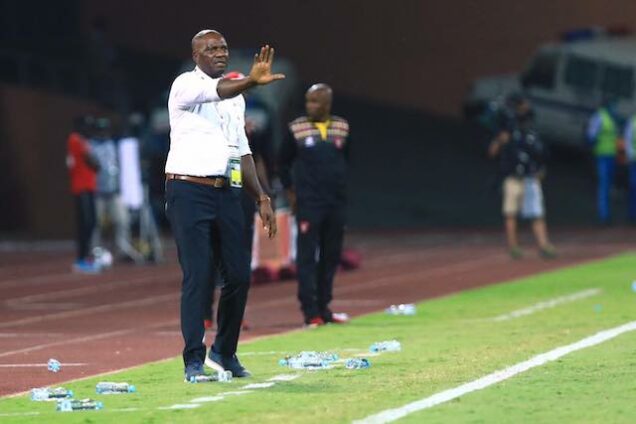 Super Eagles’ head coach, Augustine Eguavoen, said his team will not underrate their opponents during their 2021 Africa Cup of Nations (AFCON) Round of 16 fixture on Sunday.

The match between Nigeria and Tunisia will take place at the Stade Roumdé Adjia in Garoua, Cameroon from 8 p.m.

The Tunisian camp had been somewhat ravaged by positive COVID tests and there were no indications yet as to whether some star players, including Wahbi Khazri, will return for the game.

Eguavoen however told newsmen during a pre-match press conference on Saturday in Garoua that in spite of the Carthage Eagles’ challenges his team would remain focused on the job ahead.

“Yes, Tunisia may have struggled during the group stage, but don’t forget that they are a powerhouse when it comes to African football.

“We (will) go into the game with the same approach, and same aggression (as we have done before) because we have a target set for ourselves and this is the process.

“To get in there we have to work hard, work extra hard. Our opponents are technically very good and very organised. But things have not really been going well for them and we understand that.

“But tomorrow (Sunday) may just be different. So, we will not just take our legs off the pedal,” he said.

The coach disclosed that his team was well prepared and have been working hard in all areas and aspects of the game ahead of the match.

“In this competition, the standard is so high (so much) that everybody prepares both defensively and offensively.

“We can’t tell where the goals will come from. It could either be from free-kicks, the penalty kick spot or from corner-kicks.

“We work on those things. The other time, Semi Ajayi came close, Taiwo Awoniyi also came close and we have also not conceded from those set-pieces either.

On his selection of starting players for the game, Eguavoen said there was no reservation or preferential treatment for any player, adding that whoever was called upon would give his best.

“We are here with 27 players. Everyone is here to play. But we can’t use more than 11 players to start tomorrow.

“So, whoever is called upon will give his best. I always tell the boys to give 100 percent. No reservation or preference for players.

“I always tell them, `if you are tired during games, simply signify to the bench and we will do the needful’,” he said