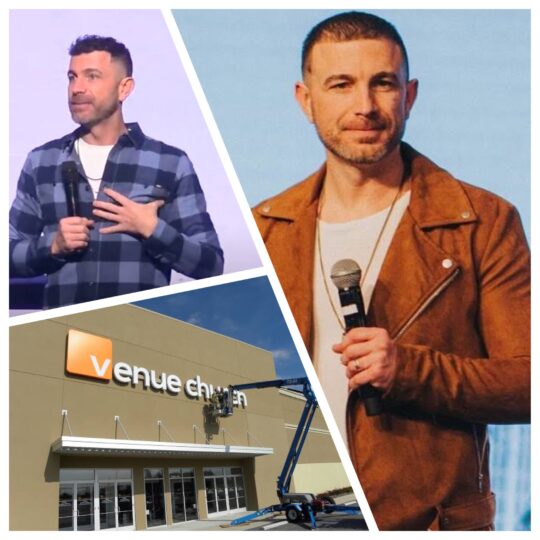 Pastor Tavner Smith’s Venue Church in Chattanooga, Tennessee, United States began in 2012 in an old building that once belonged to old Sam’s Club.

It grew in leaps and bounds, such that every Sunday, up to 2,000 worshippers congregated in the church by 2020.

By 2015, Venue was on Outreach Magazine’s list of fastest-growing churches in the U.S.A.

Thereafter, the church began to unravel, triggered by the misdemeanours of its founder, Tavner Smith.

His extra-marital affair with a married female church member, his divorce with his wife, aggressive drives for membership, tithes and donations have combined to destroy the fast growing church.

Members have quit in droves, but not before the pastor had grown rich on the tithes collected, buying up properties and treating himself with designer wears and new cars.

“In January 2021, Smith announced to the congregation what many staff and volunteers already suspected: He and his wife were splitting for good. He said the board had asked him to take a break from preaching and attend six weeks of counseling. But two weeks later, according to multiple former attendees, he was back at the pulpit, claiming God had told him to return.

“As the situation at Venue deteriorated, Smith’s sermons took on an air of desperation. He started calling people out in public for not donating enough and spoke frequently about not associating with “the enemy”—which some took to mean the people who had left the church. The final straw for some was a 16-week series Smith hosted called “Dirty Destinies,” which centered around people in the Bible who had done terrible things but later recovered.

“It was at that point that I started saying, ‘Is this to make him feel better about his decisions?’” one attendee said. “We were kind of like, at that point, how much longer is this going to drag out?”

That former attendee said she had given Smith the benefit of the doubt for months. Both she and her husband had talked to Smith and his alleged paramour, respectively, and both had denied the affair. She figured it was nothing more than a friendship gone a little too far—but still, something in the church felt off. She and her husband were discussing their reservations last month when someone from the church sent them a video. It showed Smith and his employee sitting close together in a restaurant, looking friendly, until she leaned in for what appeared to be a very discreet kiss.

“At that point we were just kind of like, ‘OK that’s the physical evidence,’” the former attendee recalled. “That was the moment that we were like, ‘That’s what we needed.’”

Smith quickly called a meeting with staff and employees to address the video, which was circulating quickly online. The former church member and her husband were in attendance, and said the pastor was evasive and refused to answer questions directly. She said she was stunned by his seeming lack of concern.

“I think that’s the biggest thing: He has no remorse,” she said. “Somebody told me he sees nothing wrong with the decision because he truly believes that’s what God told them to do.”