As Soludo takes the baton in Anambra 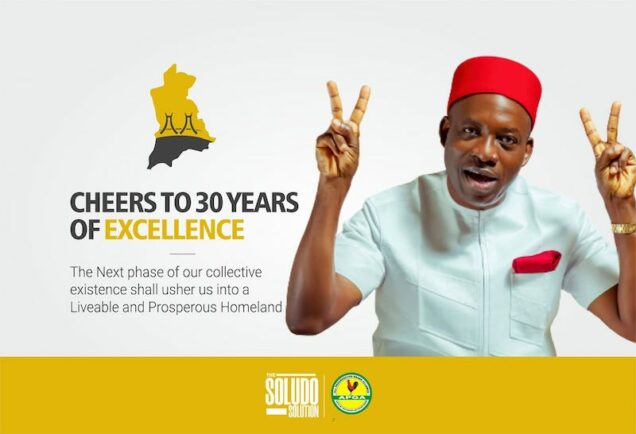 On 17 March, Professor Chukwuma Soludo will be sworn in as governor of Anambra state following his resounding victory at the poll held on the 6th and 9th November, 2021 across the 21 LGAs that make up the state. The election was held against many odds; from kidnapping, banditry on many highways across the country to senseless killings in the South East by gunmen which apparently contributed to low turnout of voters. The total registered voters in Anambra was 2,466,638 but only 253,388 voters showed up for accreditation. Still, out of the accredited figure, only 249,631 voters persevered to cast their votes. Amid these odds, the majority of the voters endorsed a renowned professor of economics, Charles Chukwuma Soludo of the All Progressives Grand Alliance (APGA) to succeed Willie Obiano. Soludo resoundingly won in 19 out of 21 local government areas, and consequently returned by the Returning Officer, Prof Florence Obi as duly elected.

However, political gladiators haven’t given up. On 1 December 2020, Justice Taiwo Oladipupo Taiwo of the Federal High Court in Abuja valiantly dismissed a ridiculous application against APGA’s victory, and awarded N2 million against the plaintiffs describing the suit as “frivolous, irritating, baseless, and lacking merit”. Furthermore, thirteen political parties have filed petitions at the Anambra Governorship Election Tribunal including those that had earlier congratulated the winner. Whilst the rest demand for cancellation of the poll with flimsy reasons, APC believably the actual opponent claimed he won the poll with the highest votes, a similar scenario and technicality that played out in favour of Hope Uzodimma in Imo state. Many perceive that the other political parties that filed petitions were shrewdly hired to neutralize the contest as a solo thing.

Be that as it may, the onus is on the judiciary to show expertise. The judiciary should note that till date, the people of Imo have not recovered from the shock in 2020. As we speak, the present government of Imo state still struggles for legitimacy on account that the peoples’ votes didn’t count accordingly. The beneficiary is pigeonholed as the ‘Supreme Court-governor’ and ‘government by the court’, and this could seriously, negatively affect the masses’ disposition in future elections.  Rationally, when faced with such situations, the court at most, could order a rerun for the contested areas to ensure that peoples’ votes ultimately count rather than the ‘Father-Xmas’ approach thereby installing an ‘undemocratic government’ in a democracy.

Unacceptably, the judiciary cannot turn to a tool for crooked politicians to destroy democracy. Conventionally, any verdict that is repugnant to natural justice, equity and good conscience will confront legitimacy crises. Even if the judgment in the Imo governorship poll was technically sound, it lacks fairness considering that democratic values were flouted. Obviously, if this pattern is not checked, people may lose confidence in democracy and may not bother to campaign and vote, instead spare their energy for frivolous legal claims. This possibly accounted for why only few candidates campaigned vigorously in the Anambra election.

Looking at Soludo’s blueprints, right from campaign, the former CBN governor assured of a paradigm shift, to run an all-inclusive government in Anambra that would usher robust changes in the polity, precisely a radical transformation approach. Expressing confidence in him, President Muhammadu Buhari in his congratulatory message over his victory elatedly looks forward to his cooperation. The president said: “I look forward to working with you for peace, security and development of Anambra State and the entire country”.

To walk-the-talk, Soludo has constituted an 80-member transition committee chaired by Dr. Obiageli Ezekwesili, a former minister, and prominent Nigerians with stout profiles notwithstanding of state-of-origin as members though on pro bono. Members include Prof Pat Utomi from Delta State, a Professor at Lagos Business School; Dr. Alex Otti from Abia State, former Managing Director of Diamond Bank who through radical innovations took the bank to enviable height, Chief Olisa Agbakoba (SAN) etc. Many wondered why such a longlist for a mere transition committee and, with some non-Anambra indigenes. To assemble mavens in various fields as a kind of pre-inauguration symposium strongly points to Soludo’s determination to usher in economic revolution. Understandably, the longlist is more or less a leaders’ summit and suggests that the incoming-governor is determined for exploits, and seriously setting directions and targets for his administration. Deductively, Soludo fathoms leadership from previous engagements.

At the inauguration of the transition committee, Soludo gave an insight of his forthcoming administration and profoundly announced that he would work with experts from anyplace not minding the state-of-origin and reiterated his priority is service-delivery. Remarkably, he avowed that his administration is not for jamborees, hence, no fanfare during inauguration. In fact, Soludo has scheduled to proceed straight to the field immediately after swearing-in for work, and outrightly threw away ‘His Excellency’ title into the abyss and preferred to be addressed as ‘Charlie Nwamgbafor’ or at most Mr. Governor. Earlier, during a pre-campaign interview with BBC-Igbo, Soludo had unassumingly introduced himself as ‘Charlie Nwamgbafor’ which translates to ‘Charles, Mgbafor’s son in Igbo as fondly called while growing up in Aguata. His mother’s name; Mgbafor is a female born on ‘Afor’ day in Igbo tradition, and rarely will anyone of his standing mention such a name today or accept his mother’s name bears any of those olden days’ names in this modern age.

By the demonstrated openness, zeal, teamwork, knowing his roots and onions, Soludo realistically will take Anambra to enviable height and change the face of leadership in Nigeria. This is the revolution to strive for. As Soludo argues, if capable hands could man various states that make up the country, national growth will be certain. I agree with him absolutely. To put a square peg in a square hole remains the challenge facing the country. Putting it better, many occupying leadership positions nationwide have no business at all to be nearby. Thus, all eyes are on Soludo to break the jinx. Carry on Soludo!