How Oba of Benin named his quadruplets 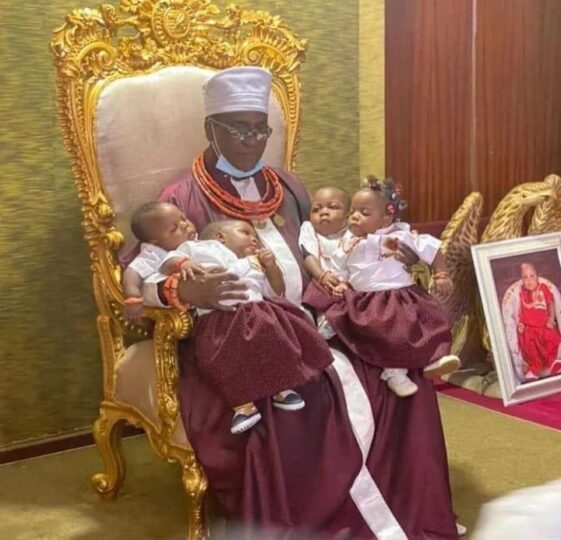 Oba of Benin, Ewuare II with his quadruplets

The Palace of the Oba of Benin was agog on Sunday, as Oba Ewuare II performed the naming ceremony for his quadruplets amid fun fare and merriment.

The royal naming ceremony was witnessed by dignitaries from all works of life.

The News Agency of Nigeria (NAN) recalls that the quadruplets were delivered last year August by Her Royal Highness, Oloi Aisosa Ewuare.

The colourful event began at the presidential office of the palace with a formal presentation of the babies to entire royal family members, chiefs and top palace functionaries by the Oba.

Omo N’Oba Ewuare thereafter proceeded to Ugha-Eroba axis (ancestral ceremonial hall) of the palace where prayers of protection, guidance and prosperity were made for the three infant princes and a princess at the ancient alter of their forebear.

Shortly after the prayers in line with the palace tradition, Oba Ewuare gave names to his new babies which was announced by Chief Letema who acted in absent of Head of Ihogbe group, Chief Ihama.