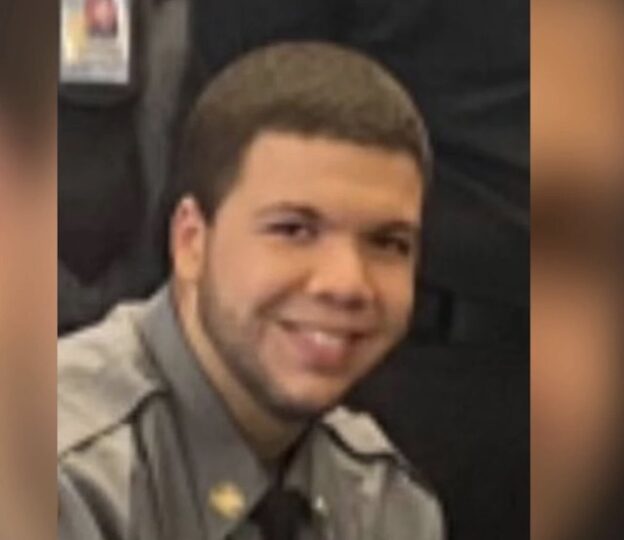 Jason Rivera came from an immigrant family and grew up in a community with strained police relations.

“I know that something as small as helping a tourist with directions, or helping a couple resolve an issue, will put a smile on someone’s face,” Rivera wrote to his commanding officer in 2020 when he was a probationary police officer.

Growing up in Manhattan’s Inwood neighborhood, he noticed tensions with police, according to a brief essay titled “Why I Became a Police Officer,” a copy of which was obtained by The Associated Press.

“I remember one day when I witnessed my brother being stopped and frisked. I asked myself, why are we being pulled over if we are in a taxi?” he wrote.

“My perspective on police and the way they police really bothered me.”

But eventually he noticed the department working to improve relationships, and he wanted to be involved.

“I realized how impactful my role as a police officer would go in this chaotic city,” he wrote.

Anti-domestic violence advocate Stephanie McGraw, who knew Rivera through her work with the precinct, said he was energetic and enthusiastic.

“He was so eager to make a difference in this community,” said McGraw, founder of We All Really Matter.

Rivera and Officer Wilbert Mora were shot Friday night while answering a call about an argument between a woman and her adult son.

Cardinal Timothy Dolan, the Archbishop of New York, visited Mora and his family in the hospital and gave the wounded officer a blessing, according to a spokesman of the archdiocese.

The shooting was the latest in a string of crimes that have unnerved the nation’s largest city.

“It’s hard to believe, but it’s only been three weeks, and it has been nonstop since then,” Adams told residents at a gun violence roundtable Saturday.

“But I want you to know in a very clear way that I am more energized. I’m not tired. I’m not stressed out.”

Mora, who has been with NYPD for four years is similarly devoted to the community, Stephanie McGraw said.

How they were shot

Mayor Adams said a woman who made an emergency call Friday said she was ill and that her son who had come up to take care of her had become “problematic.” Adams said the woman did not specify the problem.

Authorities said three officers went to the apartment after the call came in.

Officers spoke with the woman and another son, but there was no mention of a weapon.

Rivera and Mora walked from the front of the apartment down a hallway, and McNeil swung open a bedroom door and opened fire, Chief of Detectives James Essig said.

As McNeil tried to flee, a third officer who had stayed with McNeil’s mother in the front of the apartment shot at McNeil and wounded him in the head and arm, Essig said.

The cop shooter McNeil was on probation for a 2003 drug conviction in New York City. He also had several out-of-state arrests.

In 1998, he was arrested in South Carolina on suspicion of unlawfully carrying a pistol.

But records show the matter was later dismissed.

In 2002, he was arrested in Pennsylvania on suspicion of assaulting a police officer, Essig said.