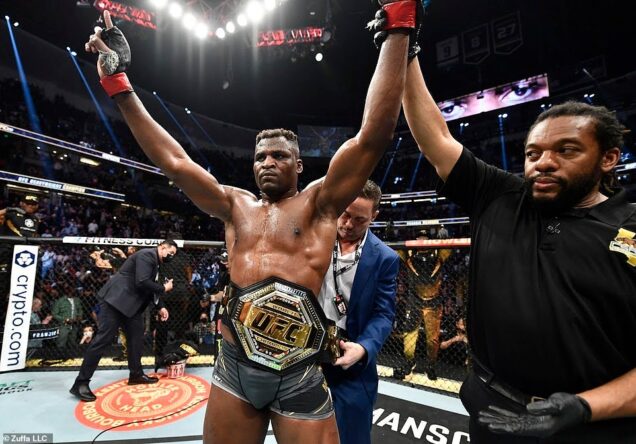 Francis Ngannou has defeated Ciryl Gane to retain his heavyweight title at UFC 270 in what may be his last fight with the franchise.

The Cameroonian took down the interim champion defeating his former training partner in the championship rounds to earn scores of 48-47 twice and 49-46.

Gane edged the first two rounds before Ngannou wrestled his way back into the fight.

Ngannou landed a huge bodyslam in the third round and scored a double-leg takedown as he tried to beat up Gane on the ground.

Ngannou was defending his title for the first time since he knocked out Stipe Miocic 10 months ago.

The Cameroonian who wore sleeves on both knees in the bout – admitted in his post-fight interview that he considered pulling out after tearing his MCL during training.

“I knew that he was going to be a tough opponent, no doubt,” Ngannou said after the fight. “I was surprised that he held on to the end of the fight but he was very good. The only thing that I had to do, that my coach reminded me all the time, was stay composed. Trust yourself, don’t chase him.”
“I hurt my knee, tore my MCL completely and hurt my ACL,” Ngannou said. “I wanted to pull out of this fight but couldn’t see myself retreating from this fight because it was a chance to make a statement and remind everyone that I’m the champ.”

Now out of contract with the UFC, the win means Ngannou will owe the promotion another fight but will be free to leave in December.