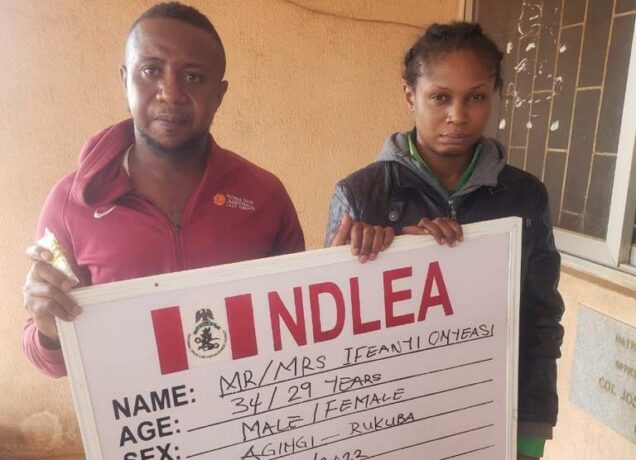 Ifeoma and her husband arrested with cocaine

The wife of a suspected drug dealer, Ifeoma Godwin Sade attempted to swallow 12 grams of cocaine to prevent officers of the National Drug Law Enforcement Agency, NDLEA from arresting her husband.

The incident occurred in Plateau State when NDLEA officials stormed their house, spokesman of the agency, Femi Babafemi said on Sunday.

He said the woman, 29, wife of a drug dealer, Ifeanyi Onyeasi, 34, attempted to swallow 12 grams of cocaine found in their house at Agingi, Rukuba road, Jos.

Babafemi said her attempt to swallow the cocaine during an arrest operation was scuttled by NDLEA operatives who retrieved the drug from her throat on Sunday 16th Jan.

“Also recovered from them was a monetary exhibit of Two Hundred and Thirty Four Thousand Six Hundred and Fifty Naira Only (N234, 650),” he added.

Babafemi further disclosed that different quantities of cannabis, methamphetamine and tramadol were seized from two suspects; Aliyu Abdullahi and Ishaya Emmanuel, when a commercial bus with reg. number GME711YX bringing them from Lagos to Yola, Adamawa state was intercepted along Abuja road by officers of the Plateau state command on Wednesday 19th Jan.