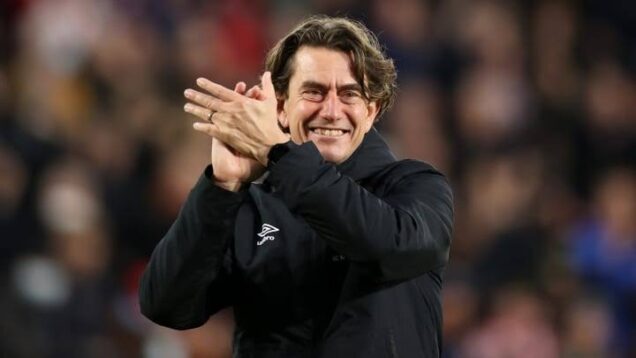 Brentford have confirmed that head coach Thomas Frank has signed a new contract that will run until 2025.

Frank had 18 months remaining on his previous contract in west London and the Bees have been keen for Frank to commit to a new contract.

Brentford director of football Phil Giles said in a statement: “On behalf of everyone at Brentford, I’d like to congratulate Thomas and Brian on their new contracts.

“First and foremost, they are fantastic people to work with and I’m sure everyone at the Club will be pleased that they have committed to stay with us until 2025.

“They have been integral to the success that we’ve shared over recent seasons, culminating in achieving our shared target of playing in the Premier League.

“We want to continue to take Brentford forward, to compete with clubs far bigger than us, and to see how far we can progress.

“I am sure that we can build on the success that Thomas and Brian have helped deliver along with all of the other staff and players and look forward to what I hope will be a successful conclusion to the season and beyond.”

The London club are also in advanced talks to finalise terms on a six-month contract with Christian Eriksen.

The deal according to SkySport would be finalized in 48 hours. The Bees are now in the process of doing due diligence on the 29-year-old midfielder’s fitness to play.

He will also need to obtain a work permit.

The medical process Eriksen will have to go through will be more complicated than for a typical new signing.

This was because he suffered a cardiac arrest seven months ago while playing for Denmark at Euro 2020.

At the moment he has an ICD (implantable cardioverter-defibrillator) fitted to his heart.