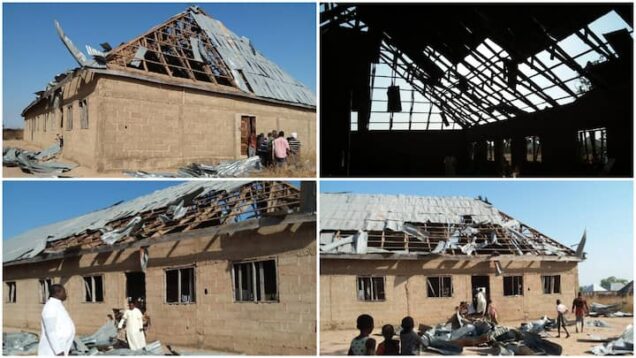 An explosive device blew up at the Catholic Chapel of St. John’s College, Mutum-Biyu in the headquarters of Gassol Local Government Area of Taraba.

The Principal of the College, Rev. Fr. Emmanuel Ikyaan, told journalists that the explosion blew up at about 7:20 p.m on Sunday.

He said: “We thank God no life was lost, but the church has been destroyed; and 10 minutes after the explosion in the school, we started hearing gunshots in the town.

“The youths and some students were holding a programme in the chapel is also used as the school hall and they had left the premises shortly before the explosion.

“I want to call for a thorough investigation to unravel those behind the attack and the perpetrators brought to book.”

He said: “What happened was that some kidnappers came to kidnap the owner of one filling station in the town, unfortunately for them, they could not achieve their mission.

“In the process of running to escape being trapped, they started shooting sporadically to escape.

“It was in the process that they threw an explosive into the church to cause fear to enable them to escape.

“The explosion blew up and caused some damages to the building but luckily nobody was hurt.”