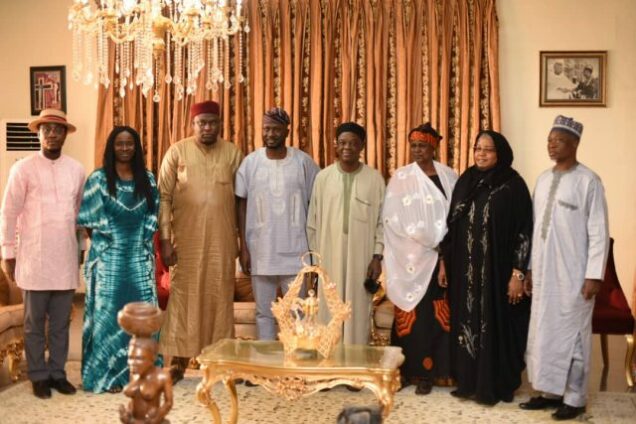 The Vice-Chancellor of the University of Ilorin, Prof. Sulyman Abdulkareem, has described the death of the Soun of Ogbomoso, Oba Jimoh Oyewumi, Ajagungbade III, as a huge loss not only to the people of Ogbomoso but also to the entire mankind.

According to the University of Ilorin’s bulletin issued on Monday, Abdulkareem, made the statement when he led a four-man team of the Board on a condolence visit to the Soun’s Palace.

The Vice-Chancellor, who is also a member of the Board of the National Youth Service Corps (NYSC), also condoled with the people of Ogbomoso on the death of Chief Christopher Alao-Akala, a former governor of Oyo State.

He described the late Oba Oyewumi as a well-recognized industrialist and a renowned traditional ruler. The VC said that Oyewumi’s tentacles were spread beyond political, religious and tribal affiliations before and during his 48 years of reign in Ogbomoso land.

While eulogizing the late traditional ruler, Abdulkareem said with the progressive development in the town, reported, seen and testified to, the late Ajagungbade III lived an exemplary life worthy of emulation by all.

He condoled with the entire people of Oyo State, especially the indigenes of Ogbomoso, over the demise of the traditional ruler, as well as the recent loss of their illustrious daughter and sons.

The professor also described as sad the demise of Prof. Taibat Danmole; the eldest daughter of the late Soun, who was also a former staff member of the University of Ilorin, Chief Christopher Alao-Akala and Prof. Alex Gboyega of the Political Science Department, University of Ibadan.

Abdulkareem prayed for the peaceful repose of the departed, and the fortitude to bear the irreparable loss for the families, and the entire Ogbomoso people.

In his response, Prince Oyekunle Oyewumi, the surviving eldest Prince, and a member of the National Board of NYSC, who spoke on behalf of the royal family, commended the team for commiserating with the royal family.

He added that the entire people of Ogbomoso and the royal house had taken solace in the fact that the Crown lived well.

Similarly, the team also paid another condolence visit to the Minister of Sports and Youth Development, Chief Sunday Dare, who is also a prominent son of Ogbomoso, and whose Ministry oversees the NYSC.

While welcoming the team, the Minister, who is also the `Agbaakin’ ( a traditional chief’ of Ogbomoso land, thanked them for their thoughtfulness by identifying with Ogbomoso land during the dark time of mourning, saying it is best known to God.