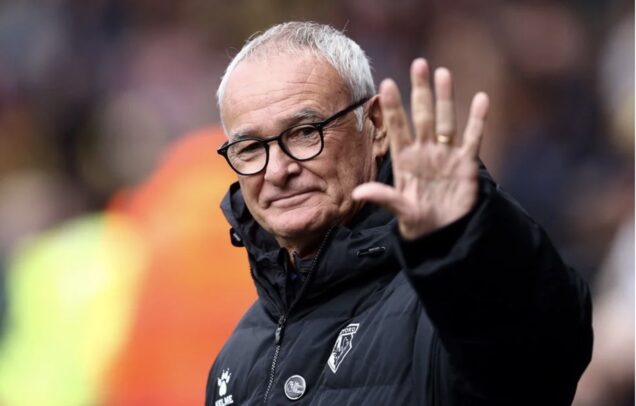 Claudio Ranieri has been sacked by Watford just after 112 days in charge.

The Italian and former premier league winner with Leicester was given the boot today, with the club facing the prospect of being relegated.

Watford now sit 19th in the Premier League, having managed to take just seven points in the three and half months Ranieri was in charge.

Ranieri was appointed in October to replace Xisco Muñoz.

At the time of the appointment Watford were 15th in the Premier League, with two wins from seven games.

The club did not confirm Ranieri sack until Monday night, according to a statement on their website.

The Hornets’ Board recognises Claudio as a man of great integrity and honour, who will always be respected here at Vicarage Road for his efforts in leading the team with dignity.

However the Board feels that, with nearly half of the Premier League campaign remaining, a change in the Head Coach position now will give a new appointment sufficient time to work with a talented squad to achieve the immediate goal of retaining Premier League status.

No further club comment will be made until this new appointment is confirmed in due course.